Gagosian, the world’s largest gallery, now represents London-based artist Jadé Fadojutimi, whose ascent over the past few years has made her one of the most closely watched abstractionists working today.

Fadojutimi’s first presentation with Gagosian will be an installation of new works at the gallery’s Frieze London booth in October. She will continue to be co-represented by Cologne’s Galerie Gisela Capitain and Tokyo’s Taka Ishii Gallery, but will depart her London gallery, Pippy Houldsworth, which gave the artist her first solo show in 2017.

Fadojutimi, who is not yet 30, is best-known for her large-scale abstractions in which colors, shapes, and lines butt up against each other, commingling in vibrant and dazzling ways. These works draw on a vast array of influences, from 20th-century painting to Japanese anime to music. 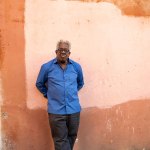 At Gagosian, Amanda Williams Investigates the Possibilities and Limitations of a World Shaped by Color

In a statement describing her art, Fadojutimi said, “Human. Animal. Natural. We all have souls; objects too. We are all beauty, and that is what is encapsulated by the word life.”

Over the past few years, Fadojutimi’s work has been in high demand, both on the primary and secondary markets.

Last October, two works by the artist were auctioned on consecutive nights during the London sales, resetting her record twice. In a Sotheby’s day sale, her painting A Muddled Mind That’s Never Confined, made earlier that year, sold for to £1 million ($1.4 million); the following day, her 2017 painting Myths of Pleasure sold at Phillips for £1.2 million ($1.6 million), or about 15 times its pre-sale estimate of £80,000.

Fadojutimi’s works have also been acquired by major institutions. Last year, Tate in London purchased her 2018 canvas I Present Your Royal Highness, making her the youngest artist in the British institution’s collection at the time. Her work is also held by the Hirschhorn Museum and Sculpture Garden in Washington, D.C., the Baltimore Museum of Art, the Walker Art Center in Minneapolis, and the Los Angeles County Museum of Art.

During Art Basel Miami Beach, Fadojutimi opened a major solo show of new work at the Institution of Contemporary Art Miami. From that exhibition, the Metropolitan Museum of Art in New York acquired her 2021 Hope, which is currently on view at the museum.

In addition to appearing in the 2021 Liverpool Biennial, Fadojutimi currently has work on view at the Venice Biennale in the Cecilia Alemani–curated main exhibition “The Milk of Dreams,” and the artist will have solo show at the Hepworth Wakefield in England later this year.

In an email to ARTnews, Milicent Wilner, a senior director at Gagosian, said, “We have followed Jadé and her expressive, expansive practice with interest and admiration and are excited to play a part in her future story.”