Seven people have been sentenced to prison for stealing eight paintings collectively worth €2 million ($2.04 million), including two works by French painter Pierre Soulages, from a Paris apartment while their owner was sleeping.

The sentences range from six months to four years in prison, though the person dealt the heaviest sentence for convictions of aggravated robbery and criminal association is still being sought by the police.

The robbery occurred on the night of July 28, 2020, when the thieves slipped into the apartment through an open window. According to the French newspaper Le Figaro, the thieves had learned from the “dealer of a large art gallery” that the apartment, locatedin Paris’ fifth district near the Seine River, one of the city’s most storied, was home to works by Soulages, André Lanskoy, Gerhard Richter, Hans Hartung, and Jean Fautrier. Soulages’ studio is reportedly in the same building. 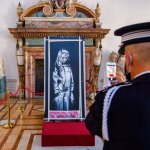 Three Hong Kong Men Receive Two and a Half Years in Jail for $637 M. Art Heist

The group was apprehended before they succeeded in selling the paintings thanks to surveillance footage and a photo taken of them by a witness. Yielding to police pressure, the group returned six of the eight stolen paintings; the last two were discovered during searches of the suspects’ properties.

Among those sentenced for concealing the loot was the 74-year-mother of the man currently in hiding, who was identified only as Tarik H. His former lawyer was also given a five-month suspended prison sentence for concealment after accepting one of the paintings as a gift. Those sentenced who actively participated in the theft will have to jointly pay around €8,800 ($8,950) to the victim for “material and moral damages” and €4,500 ($4,577) in legal expenses.

Pierre Soulages, who celebrated his 102nd birthday last December, is an important figure in the French contemporary art scene, having defined himself early on with a stark black-and-white abstract style that defied trends in abstraction in the mid-century.

In 2005, Soulages and his wife Colette donated nearly 500 paintings to establish the Musée Soulages in his hometown of Rodez, France. In 2021, a 1958 painting by Soulages broke his auction record with a sale of $4.3 million in New York, defending his place as France’s most expensive living artist.