Halsey, the Grammy-nominated pop star, painter, and poet, has entered the the world of fine art. Five drawings she created live onstage are currently for sale at Sotheby’s, and the proceeds will benefit the National Network of Abortion Funds.

The drawings are included in Contemporary Discoveries, which features artists such as David Hockney, Andy Warhol, and Os Gêmeos. The auction opened on July 19 and will run through July 19. Halsey’s works are expected to fetch around $7,000 each. Bids currently range between $5,500 and $6,500.

She created each piece on different nights of her “Love and Power Tour,” which wrapped its U.S. leg in California on July 9, while singing an untitled three-minute song. Hand moving in tandem with the melody, Halsey swiftly brought to life on white canvas androgynous faces punctuated by primary colors. According to the artist, the paintings are meant to symbolize the individual energies of each audience. 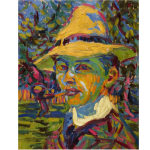 The “Without Me” singer first painted during a performance when she appeared on Saturday Night Live in 2019 and drew the cover for her New York Times best-selling book of poetry,I Would Leave Me If I Could.

Halsey has been an outspoken advocate for reproductive healthcare access. In July, after the U.S. Supreme Court overturned Roe V. Wade, she shared her personal experience with a live-saving abortion procedure in an essay for Vogue. “I miscarried three times before my 24th birthday,” She wrote. “One of my miscarriages required ‘aftercare,’ a gentle way of saying that I would need an abortion, because my body could not terminate the pregnancy completely on its own and I would risk going into sepsis without medical intervention.”

“Many people have asked me if, since carrying a child to term after years of struggling to do so, I have reconsidered my stance on abortion,” Halsey continued. “The answer is firmly no. In fact, I have never felt more strongly about it.”