Tan Boon Hui, Singaporean art curator, administrator, and stalwart promoter of Asian art on the global stage, died on July 7 at age 53. He had been hospitalized since May following a stroke.

Tan had recently returned to Singapore to lead the nonprofit Arts House following a tenure as director of the Asia Society in New York. He was known internationally for his dynamic approach to arts administration and his dedication to artists from Asia and its diaspora.

He organized two editions of the Singapore Biennale and was instrumental in founding the Asia Society Triennial, whose inaugural edition, “We Do Not Dream Alone,” opened in 2020 during the most devastating period of the Covid-19 pandemic in New York. 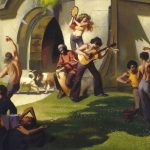 “We mourn the loss of a dynamic and innovative leader, a strong advocate for the arts, a passionate and visionary champion, a mentor, a friend and a creative inspiration to many in the arts community and beyond,” Arts House said in a statement on Facebook. The organization added that Tan left “an indelible mark on those who knew him and had worked with him.”

Tan Boon Hui was born in Singapore in 1968. He joined the Singapore’s Asian Civilizations Museum as an assistant curator in 1997 after a stint producing exhibition catalogues for Southeast Asian institutions.

Tan then served as deputy director of programs at the National Museum of Singapore, during which time he organized the Singapore Pavilion at the 2003 Venice Biennale. In 2009, he began a lauded directorship of the Singapore Art Museum (SAM) marked by a fresh focus on Southeast Asian art. In 2013, during his time at SAM, he introduced a collaborative curatorial approach to the Singapore Biennale.More than 20 regional art professionals were invitedto help shape “a distinctive Asian identity” for the exhibition.

“Because of his steadfast belief in and support for contemporary art and artists of this region, many local artists at that time were given a national platform to present their diverse art practices to audiences,” SAM saidon Instagram.

In 2013, Tan left SAM to become assistant chief executive for museums and programs at Singapore’s National Heritage Board, where he launched the Singapore Night Festival. In 2015, he served as artistic director for Singapour en France, le Festival,a multidisciplinary presentation of contemporary Singaporean and Southeast Asian arts and culture held in French cities including Paris, Lyon, and Nantes. Later, he assumed the roles of vice president of global artistic programs and directorof New York’s Asia Society Museum.

“As a curator I am interested in how art is a way of seeing and navigating ambiguity,” he toldHyperallergic in 2020. “At one level, my approach is social-political—not so much in direct action but in how art is today one of the most powerful ways to resist the isolation that larger social-political forces and structures push us towards. Before we act, we see and recognize, so art must help us recognize the deeper structures and networks that bind people, ideas, and goods through space and time.”