Disgraced Florida art dealer Daniel Elie Bouaziz has been indicted on charges of wire fraud, mail fraud, and money laundering for allegedly peddling reproductions of works by Jean-Michel Basquiat, Andy Warhol, and Banksy, among other prominent artists, as originals.

Bouaziz was arrested in May for his alleged involvement in the operation, following an F.B.I. raid of one of his Palm Beach galleries, Danieli Fine Art, in December 2021.

Bouzaiz also owns Galerie Danieli on Worth Avenue, a popular destination for outposts of blue-chip galleries. The F.B.I. indictment states that the fraudulent art sold from Bouaziz’s enterprises was originally listed on online auction sites at low prices; Bouaziz bought them and marketed them as originals. He provided misleading provenance documents to create the appearance of authenticity, as well as “false assertions and appraisals,” according to the indictment, with a stamped signature block that read “Daniel Bouaziz, Certified International Fine Art Appraiser.” 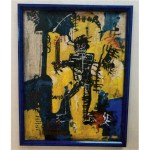 Among the the fraudulent works believed to have been sold by the Algeria-born French art dealer was a “Basquiat” that he bought on LiveAuctioneers for $495, authorities said. The dealer allegedly flipped the work to an undercover FBI agent for $12 million. A member of the Basquiat estate’s since-disbanded authentication committee identified the work as a fake, according to the criminal complaint affidavit.

Bouaziz is also accused of having sold a Roy Lichtenstein print to an undercover agent for $25,000. A comparison of the reproduction with an image of the original in the artist’s catalogue raisonné revealed several glaring differences in the color schemes.

The authorities became involved after clients of Bouaziz started to demand their payments back, with no success.

“Other victims, who also reported concerns to Bouaziz about the authenticity of their purchased work, both before and after the execution of the gallery search warrants, received some repayment from Bouaziz,” the complaint said.