ocaa 5月前
Jordana Moore Saggese, an art history professor hired to provide her professional assessment of 27 paintings with a contested attribution to Jean-Michel Basquiat, has released a statement denying that she ever claimed the works were legitimate.

“Those claims are false,” she wrote in a statement published Sunday by the Baltimore Sun, “Their publication caused me substantial reputational damage and emotional distress. Nowhere in the reports did I provide the positive or definitive attribution to Basquiat of any of the [Orlando Museum of Art] works.”

The works in question were featured in the Orlando Museum of Art’s show “Heroes & Monsters: Jean-Michel Basquiat” and seized during an F.B.I. raid in late June. The F.B.I.’s Art Crime Team had been investigating the authenticity of the works since their supposed discovery in a storage unit in Los Angeles in 2012. The investigation found “false information relating to the alleged prior ownership of the paintings,” according to a 41-page affidavit for the search warrant obtained by theNew York Times.

Saggese, currently a professor at the University of Maryland and a noted Basquiat expert, said she had been hired by the collection’s owners in 2017 to provide her professional opinion of the works. To sweeten the deal, Saggese wrote, the attorneys told her that “after the artwork sold for millions of dollars, [he] would fund scholarships.” She agreed to take a preliminary look at most of the works via photos, though she also reviewed seven of the works in person.

“I rejected nine works outright,” Saggese wrote. “I concluded that 11 works could be Basquiat’s based solely on a review of photographs.”

Saggese’s report, while favorable toward a number of works, was careful to say its findings are preliminary. She never examined the paintings in person. 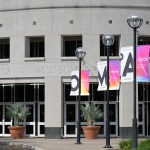 According to the collection’s owners, Basquiat allegedly sold the works directly to television screenwriter Thaddeus Quentin Mumford, Jr., who left them in a storage unit for 25 years, until he failed to pay rent on the unit and its contents were auctioned off in 2012.

The collection was bought by art and antiquities dealer William Force and his financier, Lee Mangin, for around $15,000. An interest in six of the 25 paintings was bought by Los Angeles trial lawyer Pierce O’Donnell.

Mumford refused to confirm the story and signed an affidavit to the FBI saying that not only had he never bought paintings by Basquiat, he had never met the artist. Mumford died in 2018.

To Saggese’s surprise, wording from her report was provided to the New York Times and also published in the OMA exhibition catalogue.

When Saggese tried to get her name taken off the exhibition materials, Aaron De Groft, then the director of OMA “bullied and insulted me and even sought to blackmail me,” she wrote.

In an email obtained by the New York Times, De Groft threatened to reveal how much she had been paid for her report.

“You want us to put out there you got $60 grand to write this? Ok then. Shut up. You took the money. Stop being holier than thou,” he wrote. “Do your academic thing and stay in your limited lane.”

De Groft was fired by the OMA days after the FBI raid in June.

“I wish to set the record straight,” she wrote.

For several months, my name and reputation have been dragged into the public scandal surrounding the discredited Basquiat artworks previously on display at the Orlando Museum of Art (“OMA”) as part of the cancelled exhibit “Heroes & Monsters: Jean-Michel Basquiat, the Thaddeus Mumford Jr. Venice Collection” (the “Exhibit”).

I am extremely distressed by news reports regarding my alleged involvement with the Exhibit and specifically, the false allegations that I attributed all 25 OMA works to Basquiat. These claims are false and their publication caused me substantial reputational damage and emotional distress.

I wish to set the record straight. In 2017, I was retained by an unscrupulous attorney, Pierce O’Donnell (acting on behalf of a group of undisclosed art collectors) to analyze 27 potential Basquiat works referred to as the “Basquiat Venice Collection.” Mr. O’Donnell represented himself as an attorney for owners of the works. I trusted and relied on Mr. O’Donnell as an independent representative for the owners. He did not disclose that he was one of the owners and that he stood to benefit financially from the sale of the collection.

I was not tasked with researching the provenance of the works, nor was I asked to provide an appraisal. Instead, I provided two confidential and tentative reports for the collectors, which were expressly not to be used or relied upon by third parties (including for authentication purposes) and could not be disseminated without my prior written consent. In these reports, I rejected 9 works outright. I concluded that 11 works “could be” Basquiat’s based solely on a review of photographs while reserving the right to amend my opinion upon an in-person inspection, which was never provided. Finally, I determined that possibly 7 works “may be” his, with the caveat, that I was relying on evidence from other experts in handwriting and materials/condition and a “provenance insert” provided by Mr. O’Donnell. Both reports also clearly stated that they “are in no way intended to substitute for a certification of authenticity by the Estate of Jean-Michel Basquiat.”

In 2019, Mr. O’Donnell and Dr. De Groft (the recently fired Director and CEO of OMA), asked me to participate in an exhibition of the Basquiat Venice Collection. I declined. I also reiterated that my reports were confidential.

In February 2022 (shortly before the opening of the Exhibit), I again contacted Mr. O’Donnell and Dr. De Groft, to ensure that they were not sharing the reports or misrepresenting my opinions. I wrote that I was “in no way authorized to authenticate unknown works by JeanMichel Basquiat,” I wanted “no involvement with [the Exhibit],” and I did not want to be “associated with any promotion of the[] works for financial gain or otherwise.” Both denied sharing my reports, misrepresenting my opinions or using my name in connection with the Exhibit (despite rumors suggesting otherwise). Neither were truthful.

Instead, Mr. O’Donnell misleadingly quoted from my confidential reports in the OMA exhibition catalogue to suggest that I had concluded that all of the OMA works were by Basquiat to try to legitimize the Exhibit. He even went so far as to leak incomplete and misleading extracts to the New York Times. Meanwhile, when I wrote to Dr. De Groft to reiterate my request that my name not be used in connection with the Exhibit, he bullied and insulted me and even sought to blackmail me.

The use of my reports to attribute the works to Basquiat is not only in flagrant breach of confidence, it cynically misrepresents my endorsement of the Basquiat Venice Collection. Nowhere in the reports did I provide the positive or definitive attribution to Basquiat of any of the OMA works as has been falsely stated. Any further publication suggesting that I attributed the OMA works to Basquiat is likewise defamatory and I require that such publications immediately cease. I will not be providing any further comment on this matter. All legal and equitable rights and remedies are expressly reserved.

Update 7/11/22 3:44 PM: This article has been updated to include Saggese’s full statement.

Update 7/12/22 10:20: This article has been updated to clarify that Saggese reviewed seven of the works in person.