The head of Documenta, the famed recurring art show in Kassel, Germany, has left her post amid widespread scrutiny over how the exhibition has handled allegations of anti-Semitism.

On Saturday, Documenta announced that Sabine Schormann would depart as the show’s managing director. The board and Schormann had “mutually agreed” on her departure, Documenta said, adding that it would no longer be making public statements about how it was dealing with the various controversies surrounding this year’s edition.

The board said that the decision regarding Schormann’s departure came at “short notice” and that an interim replacement was being sought.

“A lot of trust has unfortunately been lost,” the board, which manages both Documenta and the Fridericianum museum, said in its statement. “The Supervisory Board considers it essential that everything is done to regain this trust.” 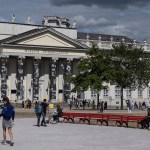 On Monday, two days after the announcement of Schormann’s resignation, Documenta said that Alexander Fahrenholz, who served as managing director of Documenta 9 in 1992, would take her place.

Two separate anti-Semitism controversies have roiled this year’s Documenta, which was curated by the Indonesian collective ruangrupa. One revolved around an artwork that contained anti-Semitic imagery, the other centered on the inclusion of a Palestinian collective.

The artwork that contained caricatures of Jews, a monumental mural by the Indonesian collective Taring Padi, was covered over amid an intense outcry, then swiftly removed altogether. Schormann, Taring Padi, and ruangrupa have apologized profusely for the work, and in one case, ruangrupa appeared in the Bundestag, Germany’s parliament, to make a statement about the work before politicians.

The Palestinian collective that appears in Documenta, the Question of Funding, has been accused of supporting the pro-Palestine movement Boycott, Divestment, Sanctions, which has been fiercely decried by some in Germany. Jewish groups in Germany claimed that the Question of Funding’s inclusion—and a perceived lack of any Israeli artists—was proof of anti-Semitism at Documenta, which this year predominantly focuses on collectives—artistic, activist, educational, and more—based in the Global South. Ruangrupa has claimed that there are Jewish Israeli artists among the 1,500 participants this year, but the collective has not specified who they are.

The Question of Funding fracas mainly took place in the months leading up to the opening of Documenta 15 this past June, and at one point even climaxed in the vandalism of the collective’s exhibition space with a message the exhibition described as being akin to a death threat.

In the case of the Taring Padi work, many have accused Documenta’s leaders of taking too long to respond or simply doing so improperly. Some have questioned how the Taring Padi work made it on view. Others, including prominent politicians like Claudia Roth, the German culture minister, have threatened to pull some funding from future Documenta editions if reforms weren’t made.

There have already been some shifts at Documenta as a result of the turmoil. Artist Hito Steyerl, who was presenting her work with the collective INLAND, pulled her work from the show, citing a “refusal to facilitate a sustained and structurally anchored inclusive debate around the exhibition, as well as the virtual refusal to accept mediation.” On the same day, Meron Mendel, the head of the Anne Frank Educational Institute in Frankfurt, resigned from his role as an adviser to the exhibition.

Schormann issued an extended statement on Wednesday in which she attempted to rebut many of the claims made against her. She seemed to suggest at the time that investigations were being taken and the exhibition would largely proceed apace.

“The first task is to join forces to bring documenta fifteen to a successful conclusion: with fairness, solidarity, and trust – especially in the artistic management and the artists,” she wrote.

But this weekend’s statement issued by the board hinted that further investigations were still to come, and that there were still possible changes that may follow.

The board said it was asking the selection committee for Documenta 15 to convene a panel of experts on “contemporary anti-Semitism, the German and global context and post-colonialism as well as art” who would effectively scan the show’s offerings, pointing out instances of anti-Semitism. This includes “the promotion of Israel-related anti-Semitism,” the board said, likely a reference to any perceived ties to the BDS movement.

Roth, the culture minister, praised Schormann’s departure, telling the Frankfurter Rundschau, “It is right and necessary that we can now work through how anti-Semitic imagery could have been exhibited and draw the necessary conclusions for the art exhibition.”