The Loewe Foundation has awarded its 2022 Craft Prize, which comes with €50,000, to Jeju-based artist Dahye Jeong for her piece A Time of Sincerity (2021), a basket that was “made from horsehair in a 500-year old hat-making technique had previously been considered a lost skill in Korea,” according to a release. “The jury celebrated Jeong’s dedication to reviving and updating the tradition, one of the key aims of the Craft Prize, as well as the delicate perfection, transparency and lightness of the work.” Jeong was selected from a shortlist of 30 finalists, and the jury also gave special mentions to Andile Dyalvane and Julia Obermaier. 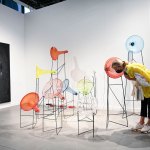 Brooklyn-based artist Yto Barrada is the winner of the Queen Sonja Print Award, the world’s largest artist prize dedicated to the graphic arts. Awarded every two years, the award comes with 1 million Norwegian Krone (around $99,000). The artist, whose film installation A Day is a Day is included in the 2022 Whitney Biennial, was cited for her “continuous search for new forms of expressions,pushing the boundaries of her own practice and our understanding of printmaking and graphic art.”

Mary Gabriel’s 2018 book Ninth Street Women won the 2022 NYU/Axinn Foundation Prize, which comes with $100,000 and is meant to “support distinguished work in artistic literary narrative nonfiction by a writer whose career is in full vibrancy,” according to a release. The book focuses on the life and art of five pioneering Abstract Expressionist artists: Lee Krasner, Elaine de Kooning, Grace Hartigan, Joan Mitchell, and Helen Frankenthaler. The year of its publication, ARTnews published an excerpt from Gabriel’s book that focused on Hartigan.

New York–based artist Shahzia Sikander recently won the Fukuoka Arts and Culture Prize 2022, which comes with a purse of 3 million yen ($21,500). It has been awarded, alongside a Grand Prize and Academic Prize, annually since 1990 by the city of Fukuoka in Japan. In her award citation, the jury wrote, “By making full use of the latest digital technology in the world of miniature painting, which follows conventions dating back to the Mughal Empire, she has brought new life and contemporary significance to traditional art forms, and has pioneered an innovative mode of artistic expression. The way she has pioneered new artistic expressions has made her a role model for female artists in South Asia, and she continues to pave the way for future younger generations to follow.”

The EYE Art & Film Prize 2022, which comes with a £25,000 purse and an exhibition at the Eye Filmmuseum in Amsterdam next year, has gone to Saodat Ismailova, who is based in Paris and Tashkent, Uzbekistan, where she was born in 1981. Her work has been influential in both the film and art worlds, screening at major festivals like the Turin Film Festival and the Berlin Film Festival, and was exhibited in the Central Asian Pavilion at the 2013 Venice Biennale. Her work is currently on view at Documenta 15 in Kassel, Germany, and in the main exhibition of the 2022 Venice Biennale, “Milk of Dreams.”

In a citation, the prize’s jury wrote, “Saodat maintains close ties with her native region as a source of creative inspiration. Her powerful work feels both refreshing and urgent. We viewed her work with tremendous excitement and fascination. Saodat succeeds in creating an almost spiritual space beyond images and soundtracks. She seduces us into ‘hearing’ image and ‘seeing’ sound. Her work is intriguing, mysterious and committed, while form and aesthetics are balanced rather than overwhelming.”

The 2022 Frieze Artist Award was won by Abbas Zahedi. The prize comes with a production budget to realize a new commission that will debut at the 2022 edition of Frieze London (October 12–16) and will be sited adjacent to the fair’s entrance in Regent’s Park. According to a release, “Titled Waiting With {Sonic Support}, the work can be seen as a conflation of two particular sites: a public waiting area and a public support space, the commission builds upon Zahedi’s long-standing interest in borders, thresholds and how things can move within systems or networks.” This year’s edition of the award required artists to think about sustainable approaches to realizing the commission; Zahedi’s new work will “utilize reusable and sustainably sourced materials and will seek to minimize any disruptive impact on the installation’s site.”

After completing its run last month, the Toronto Biennial of Art has announced the winners of two additional awards for the exhibition. (Shortly after its opening in March, the Biennial announced Camille Turner and Aycoobo / Wilson Rodríguez as the winners of the Artist Prize and the Emerging Artist Prize, respectively.) Its final two awards for the 2022 edition have gone to Lawrence Abu Hamdan for the Audience Prize and Ange Loft and Derya Akay for the Programs Prize. Abu Hamdan, who will receive CAD$10,000 ($7,700), won for his film 45th Parallel. Loft and Akay will each receive CAD$5,000 ($3,900); Loft for the Dish Dances Movement Workshops and Akay for the Queer Dowry: Sikma Günüprogram.

The Los Angeles–based Korea Arts Foundation of America has named Berlin-based artist kate-hers RHEE as the winner of its 2022 KAFA Award, which is given biennially and comes with $20,000 and an exhibition at the Korean Cultural Center gallery in L.A. next year. In a statement, the jury, comprised of curators Helen Molesworth, Virginia Moon, and Rebecca Rowley, said, “RHEE’s trajectory as an artist has been propelled by a dedication to learning about and confronting the Korean culture from which she was separated as an adopted child; her clever, thoughtful mixture of mediums in this endeavor deftly traffics in complexity and humor. What impressed us most about RHEE’s work was its sophisticated layering of motifs borrowed from historical Korean art with contemporary conceptual sensibilities: it is a rich and compelling admixture that we have no doubt will continue to expand in depth and breadth.”

The 2022 San Francisco Bay Area Artadia Awards will go to Miguel Arzabe, Gregory Rick, and Astria Suparak. Open to artists at any stage of their career, the Artadia awards come with $10,000 for each artist; the Bay Area awards were open to artists who have worked for at least two years in the Northern California counties of Alameda, Contra Costa, Marin, Napa, San Francisco, San Mateo, Santa Clara, Solano, and Sonoma. The three winners were chosen from a cohort of seven finalists by a two-person jury consisting of SFMOMA associate curator Joseph Becker and Project for Empty Space founder and co-director Jasmine Wahi.

The New York–based Foundation for Contemporary Arts (FCA) has given its 2022 Ellsworth Kelly Award, which supports an institution in realizing a solo exhibition for a contemporary artist, to the Frist Art Museum in Nashville. The Frist will use the grant money to mount a show in 2024 for Iranian-born artist Shahpour Pouyan, marking his first solo presentation in the United States. The annual prize, which was established in 2016, comes with $45,000, and was recently increased from $40,000. The 2022 edition was restricted to institutions in the eastern U.S., and the 2023 edition will go to an institution in the western U.S. In a statement, Frist senior curator Trinita Kennedy said, “Pouyan’s work is astonishing for its intense beauty, sophistication, and virtuosity. While his art is political, Pouyan never announces his agenda, leaving the door open for dialogue and understanding.”

The New York Foundation for the Arts and the New York State Council on the Arts have announced the recipients of its 2022 NYSCA/NYFA Artist Fellowship program, which comes with a $7,000 grant per artist. This year the program will disburse $661,000 to 99 artists in five disciplines. Among the winners in the photography category are Elliott Jerome Brown Jr., Joiri Minaya, Daniel Ramos, and Jessica Magallanes Martinez. The full list of winners can be found on the NYFA website.

The Los Angeles County Museum of Art has announced the recipients of its 2022 Art + Technology grants, which “include monetary and in-kind support for projects that engage emerging technologies,” according to a release. The four winners, who were chosen from over 600 submissions, are Kelly Akashi, Nancy Baker Cahill, Lauren Lee McCarthy, and Daniel R. Small. The funded projects will explore “the materialization of microscopic imaging technology, the distributive properties of mycelium networks, artificial intelligence, and relationships between diverse fields of research and the inquiries of contemporary artists.”

The Vera List Center for Art and Politics at the New School in New York has announced the five artists who have received fellowships for 2022–24, which is titled Correction* and each fellow will explore “the perils and potentials of the political, social, and metaphorical implications of ‘correction.’” The winners are Carmen Amengual,Anna Martine Whitehead, Omar Mismar, Beatriz Cortez, andFox Maxy.

The Joyce Foundation has named the five winners of its annual Joyce Awards, which “support the creation of innovative new work by pioneering artists of color working in collaboration with communities in the Great Lakes [region],” according to a release. The five winners, who will each receive $75,000, are playwright Nancy García Loza with the National Museum of Mexican Art, musician and educator Nabil Ince (a.k.a. Seaux Chill) with the Harrison Center, dancer and choreographerMichael Manson with Living Arts, artist Aram Han Sifuentes with the HANA Center, and choreographer and interdisciplinary artist Pramila Vasudevan with Public Art Saint Paul.

The International Studio & Curatorial Program (ISCP) in New York and the 1-54 Contemporary African Art Fair, which hosts editions in New York, London, Paris, and Marrakech, have awarded the 2022 Ritzau Art Prize to Johanna Mirabel, a French artist from Guyana and the West Indies. The prize comes with a three-month residency at ISCP and is given to an artist from the African continent or the African diaspora.

Last year curator Dexter Wimberly established the four-week Hayama Artist Residency in Hayama, Japan, a town on the Miura Peninsula outside of Yokohama where the Imperial Family maintains a residence. After a pandemic-related travel delay, the residency program will welcome its first four residents: Nadia Liz Estela, Linn Meyers,Francisco Maso,andAsim Waqif. The residency comes with round-trip airfare, shared accommodations, and an $800 stipend. The program has also announced an open-call for its 2023 edition, which runs through January 15, 2023.

Through July 29, #BlackVisionaries, which is a partnership between Instagram and the Brooklyn Museum, is accepting applications for its 2022 grant program, which are awarded to Black artists and designers as well as Black-owned small businesses. Doling out a total of $650,000, #BlackVisionarieswill give five grants of $100,000 for U.S.-based, Black-led small businesses that focus on design, and five $30,000 grants for emerging U.S.-based Black artists and designers.

The Hyundai Motor Group has announced an open call for its 5th VH AWARD, which supports new media artists. Applications will be accepted until July 28, and “individual artists, teams, and collectives who engage with Asia and its future” are all eligible for this edition. The five shortlisted artists will each receive $25,000 that will go toward the production of a new work that will then be exhibited in a group show.

Updated, July 15, 2022: An earlier version of this article included the news of a new photography award that is forthcoming from the Ministry of Culture of Saudi Arabia. This mention has been removed as the details of the prize are still being finalized.