The Manhattan District Attorney’s office returned 142 antiquities valued at an estimated $14 million to the Italian government, the office said in a press release Wednesday. 48 artifacts from the grouping were recovered during a criminal investigation into retired hedge-funder and art collector Michael Steinhardt.

“These artifacts deserve a place in their homeland,” Manhattan District Attorney Alvin Bragg said in a statement, calling their cultural value to Italy “immeasurable.”

A bulk of the returned artifacts came from a cache of 180 antiquities valued at $70 million that Steinhardt handed over in a deal last year ending the years-long investigation into the collector by the District Attorney’s antiquities trafficking unit. In exchange for the forfeited items, which derive from countries like Egypt, Greece, Iraq and Libya, among other regions, Steinhardt was not charged with a crime. He received a lifetime ban against acquiring antiquities in lieu of prosecution. (Steinhardt has denied any wrongdoing.) 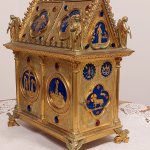 The most valuable artifact returned to Italian authorities was a fresco depicting an infant Hercules strangling a snake valued at $1 million. The DA’s investigation found that the fresco was looted in 1995 from Herculaneum, the site of an ancient town situated in modern-day Campania that was blighted during the eruption of Mount Vesuvius. Steinhardt purchased the fresco in 1995 for $650,000. At the time of the sale, there was no verified provenance record associated with the artifact.

Other antiquities that were returned include three frescoes dating from the 4th century BC depicting scenes of mourning women looted from an ancient Greek city. Bragg’s office said they were “hacked from the wall” by looters. The remaining 60 artifacts were recovered from Royal-Athena Galleries and an additional 34 were seized during ongoing investigations.