A man has been arrested in connection with the investigation into anti-Semitic graffiti found on the pavement near artist Brian Jungen’s Couch Monster sculpture in Toronto last week.

Toronto’s police department said that, on July 13 at 6:15 a.m., a man was seen spray painting the graffiti in front of the sculpture, an enormous 11,000-pound figure of an elephant constructed from discarded leather couches and cast in bronze.

A 53-year-old man, Paul Cote, was arrested two days later and charged with mischief-damage property under $5,000. However, Toronto’s Hate Crime Unit is involved in the investigation, according to the Toronto Sun, and the case is being treated as a hate-motivated crime. 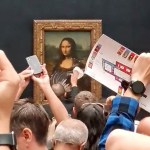 Mona Lisa Smeared with Cake by Climate Change Protester: 'Think of the Planet'

The public sculpture, whose full title is Couch Monster: Sadzěʔ yaaghęhch’ill (my heart is ripping), 2022, was commissioned by Art Gallery of Ontario and sits on a street corner outside the museum in downtown Toronto. It was installed in June.

“The use of discarded couches came from my experiences of walking the streets of Toronto and seeing them abandoned on the sidewalks waiting to be picked up at night,” Jungen told the AGO. “This was foreign to me and surprising, but to the residents of this city, accustomed to seeing them, they are invisible. I look forward to making them visible again.”

Jungen and AGO director and chief executive Stephan Jost both said when it was unveiled that they expected the public to interact with the sculpture, though it is likely neither expected it to be vandalized. At the launch event, Jost said that the previous sculpture in that location, Henry Moore’sLarge Two Forms (1966–69) was “almost never tagged,” according to the Art Newspaper.

“The AGO is working with police as they investigate a recent hate crime in front of our museum,” the gallery said in a statement. “Hate has no place here. Anti-Semitic graffiti is an attack on the Jewish community. We condemn this act in the strongest terms, and stand with our communities.”

[Correction: A previous version of this article stated that the graffiti was found on Jungen’sCouch Monster sculpture. It was found on the pavement in front of the sculpture. The article has been updated to reflect that error.]