THE CARABINIERI STRIKE AGAIN. Police in Italy said that they halted the auctionof a painting by 17th-century greatArtemisia Gentileschiin Vienna that had allegedly been exported from the country under false pretenses, theAssociated Pressreport. Officials said that the work, estimated to be worth €2 million ($2.05 million) or more, was given an export license based on documentation that claimed it was by a follower of Gentileschi, when it was in fact the work of the pioneering artist herself. The piece, titledRoman Charity,went missingfrom a private collection in 2019, perCourthouse News, which reports that two men are under investigation in the export case. In other Italian art-crime news, a museumrecently opened in Rome to show repatriated antiquities. 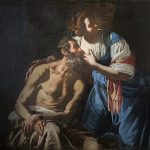 ARTIST RITZI JACOBI,who approached textiles with an expansive sense of possibility,has died at 80,Nina Siegalreports in theNew York Times. Grouped with the so-called “new tapestry” movement, along withSheila Hicks, the lateMagdalena Abakanowicz, and others, Jacobi made sprawling, alluring, and sometimes fearsome works that incorporate a kaleidoscopic array of materials, like goat hair, metal, and coconut fiber. Born in Bucharest, Romania, in 1941, six years before the nation went Communist, Jacobi defected to Germany in 1970 with her then-husband and collaboratorPeter Jacobi, while they were abroad, representing Romania at theVenice Biennale.

ArtistChase Kahwinhut Earles, who is Caddo, discussed having his work damaged bya vandal who broke intotheDallas Museum of Artlast month. “To be one of the first Caddos that had a piece in a major museum like that was a big deal, and for it to be destroyed, it was a blow not only to me, but to my tribe and for representation for our culture,” he said. The DMA said it hopes to restore all the damaged objects.[The Dallas Morning News]

Archaeologists working in Iraqi Kurdistan believe that they may have uncovered a fortress from around 2,000 years ago that was part ofNatounia, a royal city of the Adiabene kingdom.[CNN]

Seattle’sMuseum of Museumscanceled a planned show that was to be titled “Amazon vs Microsoft” and include work by employees at those two tech behemoths, after public criticism of that focus. “I understand there are blue collar employees at both companies, but I’m not sure giving some of the top earners in the city yet another platform is the way to do this,” one online commenter said.[Geekwire]

GROW OR GO.ArtDailyhas news that theAlmine Rechgallery isdoubling the sizeof its 18 Avenue Matignon gallery in Paris, with plans to unveil it in September, and thatPPOWgallery isopening another spacein Tribeca that is adjacent to its current home in that New York neighborhood, also in September.

ArtistAdam Pendletonshared a recipe for pancakes (made with rolled oats, pulverized in a food processor) that “involves nearly submerging the batter in a heaping solution of butter and—somewhat unexpectedly—olive oil,”Coco Romackreports. They look tasty![T: The New York Times Style Magazine]

THE AUTEUR OF THE AVENUES.The gallery boom in Los Angeles has continued apace recently, and theHollywood Reportercaught up with developerZach Lasry, who has beeninking dealsfor his spaces near Western and Melrose Avenues with New York–based outfits likeDavid Zwirner,Sargent’s Daughters, andShrine(the latter two share a venue). Lasry, 32, has a background in TV and movies, and told theReporter, “I wanted to bring my filmmaking lens to real estate—to approach it with a storytelling ethos. What I’m attempting to do is like producing: Hire people you trust, encourage collaboration, see what happens.” [The Hollywood Reporter]