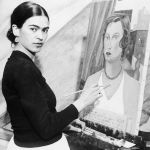 A Biographical Musical on Mexican Painter Frida Kahlo Is in Development

Is It Time to Throw Out the Term 'Muse'? Not Just Yet, a Provocative New Book Says

ALLURING ACQUISITIONS.A collection of Indian art owned by the late artistHoward Hodgkin, which was turned down by theAshmolean Museumin Oxford, England, because of worries that some pieces may have been removed from the country illegally,has been acquiredby theMetropolitan Museum of Art, theArt Newspaperreports. Of the 122 paintings and drawings, 38 have unclear provenance; they will be on long-term loan to the Met while still being owned by theHoward Hodgkin Indian Collection Trust. Meanwhile, theMuseum of Fine Artsin Boston has received a gift ofmore than 2,000 printsfrom the late economistRichard E. Caves, theBoston Globereports. “Though his vocation was economics, Dick’s secret desire was to be a print curator,” the MFA’s associate curator of prints and drawings,Patrick Murphy, said in a statement.

JournalistZachary Smallpaid a visit to theSpace, the 50,000-square-foot studio space in Charleston, South Carolina, thatBeeple, the creator of the record-smashing $69 million NFT, uses to make make work. “I am focused on legacy now,” Beeple told Small.[Vulture]

Archaeologists working in the northern part of Bavaria in Germany have unearthed what may be a 3,000-year-old clay statue of a water goddess from theHallstattculture. It measures about 7 inches tall.[Newsweek]

A copy ofShakespeare’s first folio, published in 1623, seven years after his death, sold for £2.4 million (about $2 million) atSotheby’sin New York on Thursday. Of the 750 that were printed, only 232 are believed to be extant today.[BBC News]

FLOWER POWER.The artist and floral designerLutfi Jananiahas created flower arrangements forBergdorf Goodmanand an event hosted by artistMickalene Thomas, but ina profileinT: The New York Times Style Magazine, he revealed a flower tip for projects that may have more modest budgets. “You can create fun, beautiful things with flowers from the bodega,” Janania toldT. His recommendation is carnations. “They’re looked down upon, but they’re such a strong flower,” he said. “They stick around for, like, a whole three weeks.”[T: The New York Times Style Magazine]