A British tourist will be released from an Iraqi prison after his 15-year jail sentence for antiquities smuggling was overturned, his family announced.

James Fitton, a 66-year-old retired geologist from Bath, England, was arrested on March 20 at the Baghdad airport after authorities discovered shards of pottery taken fromthe Sumerian site of Eridu in southern Iraq. He claimed that the shards were collected with the blessings of his tour guide.

Last month, in a stunning development, he was sentenced to prison under a Saddam Hussein–era law enacted to stop the rampant looting of Iraq’s cultural heritage. The maximum penalty under the law is death. 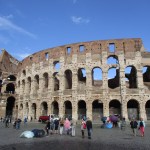 Rome's Famed Colosseum Is Worth $79 B. in 'Social Value,' According to New Study

He spent six weeks in Baghdad’s Rusafa prison, before Iraq’s Court of Cassation overturned the ruling. In a statement released on July 26, Fitton’s family said that they are “over the moon” about his release.

“We were informed this morning that the appeals court has decided to quash the verdict of the Felony Court, to fully recognize Jim’s innocence in this case, and to process his immediate release from a 15-year prison sentence in Baghdad,” Fitton’s son-in-law Sam Tasker said. “We understand that this process is underway. He is still in prison this evening but will soon be released.”

Before sentencing, Fitton explained that the tour guide, Geoff Hann, encouraged the entire tour group to pocket shards from the unguarded archaeological site. According to Fitton’s lawyer, Thair Soud, an unidentified South African woman and a German national, Volker Waldmann, also attempted to leave Iraq with such objects. Due to some confusion among customs officials, the woman was allowed to board her flight. Waldmann was arrested but acquitted of charges after his lawyer argued that Fitton gave him the two objects from Eridu in his possession. They men said they were not aware that it was illegal to collect the items from the site and had not acted with criminal intent.

Wera Hobhouse, a Liberal Democrat MP for Bath, welcomed the “fantastic development.” Hobhouse told the Guardianthat it “is impossible to imagine the stress that Jim and his family have endured over the past few months.”

There is no release date for Fitton, who is still in Rusafa prison, which is known for its brutal living conditions and significant population of Islamic State members.

Fitton’s son-in-law said that the family will not be making further statements to press until Fitton is home, adding that they “don’t want to inflame the wrong groups or put him at any risk.”

“Once he is home,” they said, “we will celebrate and take some time to recover as a family, and will be happy to tell the story to anyone who will listen.”