Documenta, the famed recurring art show in Kassel, Germany, was once again the subject of allegations of anti-Semitism this week after prominent German politicians made another plea for works to be removed. Amid this new controversy, some artists involved in the current exhibition decried what they called a culture of censorship and demanded an apology from Documenta’s leaders.

The new allegations center around works by the Archives des Luttes des Femmes en Algérie, which seeks to offer “a fragmented chronology of women’s movements and mobilizations in Algeria,” according to a description on Documenta’s website. Their work braids the struggle for independence in Algeria with other conflicts, including the one involving Israel and Palestine, which informs one of the works included in Documenta, Syrian artist Burhan Karkoutly’s 1988 brochure Presence des Femmes. 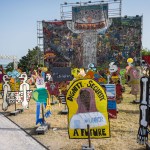 The brochure includes a depiction of what appears to be an Israeli soldier, his face rendered monkey-like, with a Star of David. A woman is shown kneeing this soldier. Other imagery represents more soldiers with abstracted faces and Stars of David on their helmets.

Werteinitiative, a German Jewish group that has previously faced controversy over its anti-Palestine positions, was among the first to allege that that Presence des Femmes is “clearly anti-Semitic.” RIAS Hessen, a Jewish group in the state of Hesse, where Kassel is located, said that the works are set in Palestine.

According to Der Tagesspiegel, representatives for the state of Hesse and the city of Kassel have asked for the works to be removed. Claudia Roth, Germany’s culture minister, echoed those requests Thursday, saying at a press conference, “It is right and proper that the partners of the Documenta have now asked the artistic direction to remove these drawings from the exhibition.”

Die Welt reported that Documenta had already investigated the works and determined that they were not anti-Semitic. “There is a clear reference to the Israeli-Palestinian conflict, but no illustrations of Jews as such,” a Documenta spokesperson said in a statement to Die Welt.

A Documenta representative said in an email to ARTnews that a statement about the brochure would be included in the show.

The representative also sent a text written by scholars with the Archives des Luttes des Femmes en Algérie that calls the brochure “a document of the history of contemporary Algeria, produced within the framework of the struggles of Algerian women who are engaged in a struggle for equality against all forms of gender discrimination but also against all the oppression of peoples including those suffered by the Palestinians. Algiers was a well known refuge for many liberation movements in the 60s and 70s, such as the South African liberation movement and the Black Panthers.”

The scrutiny over the Presence des Femmes brochure is the latest iteration in a whirlwind of controversy at Documenta 15, which opened in June and was curated by the Indonesian collective ruangrupa. Pushback from German politicians has forced the show to remove a widely decried mural featuring anti-Semitic imagery as well as the departure of Documenta’s leader.

When the show initially opened, a mural by the Indonesian collective Taring Padi loomed over the Friedrichsplatz, a central plaza in Kassel. Because the work featured representations of Israeli soldiers with pigs’ heads, the work was met with a swift outcry and allegations of anti-Semitism. Documenta removed the mural, and Taring Padi and ruangrupa later apologized for it. But the controversy has continued to haunt the show, where artist Hito Steyerl pulled her work and Documenta head Sabine Schormann left her post.

Alexander Farenholtz, Schormann’s replacement, has made clear that he would not undertake a full-scale review of works for any other instances of anti-Semitism. Jewish groups like Werteinitiative resurfaced demands for that kind of wide-ranging inquiry this week after putting forward the allegations against Archives des Luttes des Femmes en Algérie.

Before Documenta opened, Jewish groups also decried the inclusion of a Palestinian collective, the Question of Funding, which some activists alleged supports the pro-Palestine Boycott, Divestment, Sanctions movement. These groups said it was anti-Semitic to include a Palestinian collective at the exclusion of Jewish Israeli artists, though ruangrupa later claimed there were Israeli artists within the 1,500-person exhibition.

The allegations against the Question of Funding later resulted in the defacement of the group’s exhibition space with a spray-painted message that Documenta described as being akin to a death threat.

Artists in Documenta took to e-flux this week to publish a letter that they said had already been sent to Documenta’s leadership earlier this month. Their letter explicitly mentioned the vandalism of the Question of Funding’s space in May, as well as several other alleged instances of violence that took place after Documenta opened. Among them are attacks on members of the New Delhi–based queer arts space Party Office that its members said were transphobic and racist.

The letter published on e-flux was signed by 60 artists, as well as ruangrupa itself. Taring Padi, the Question of Funding, and Archives des Luttes des Femmes en Algérie were among the signatories.

Also among them was Subversive Film, a collective based between Ramallah and Brussels whose Documenta presentation had also been the subject of an internal inquiry, the letter claimed.

“Besides these direct racist and transphobic incidents, artists and lumbung members have experienced structural racism and neglect,” the Documenta artists wrote. “These have become explicit through issues related to visas, inhospitality, and neglect of data and communication related to artists and workers that identify as BIPOC, nonbinary, and trans artists. This has obstructed their physical and mental well-being and artistic process.”

Documenta also did not respond to a request for comment on the e-flux letter.

Update, 7/29/22, 3:45 p.m.: This article has been updated to include a comment from a Documenta representative.