A local charter boat captain discovered a medieval shipwreck in 2020 near Poole Bay on the southern coast of England, Bournemouth University announced last week. The shipwreck is the first known shipwreck remains from the 11th to the 14th century.

The shipwreck was preserved due to unique environmental factors, according to maritime archaeologists now excavating and analyzing the site.

“Very few 750-year-old ships remain for us to be able to see today and so we are extremely lucky to have discovered an example as rare as this, and in such good condition,” Tom Cousins, a maritime archaeologist, said in a statement to Bournemouth University. “A combination of low-oxygenated water, sand and stones has helped preserve one side of the ship, and the hull is clearly visible.” 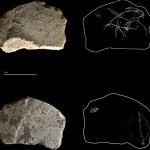 Trevor Small, the local sea captain who discovered the wreck, said he has been looking for shipwrecks for years.

“I was born into a seafaring family,” Small said in the announcement. “I’ve skippered thousands of sea miles looking for shipwrecks from my home port of Poole. In summer 2020, I discovered what I believed to be an undetected wreck site. Recent storms had revealed something unknown on the seabed. I was granted permission to dive the wreck. The rest is history! I’ve found one of the oldest shipwrecks in England.”

The archaeologists have taken to calling the site the “Mortar Wreck” as the ship was carrying stone from the British island of Purbeck, which was used to make mortars for grinding flour, and some mortars as well. The stone was an important building material in Gothic architecture and was often used for gravestones. Often referred to as Purbeck marble, the stone is in fact limestone.

The Poole Museum, a local history museum in Poole, will be displaying artifacts discovered in the shipwreck, which has new maritime-dedicated galleries.