Borisovs, who goes by the handle Shvembldr, became a popular NFT artist in 2021, selling mints of his generative art on NFT platforms such as Foundation, OpenSea, and Art Blocks. Borisovs has said that he earned 4253 Ether from his art sales, which he converted into €8.7 million ($8.89 million) and placed in a Latvian bank account. Borisovs’s figure could not be independently confirmed by ARTnews,but the artist has created a public ledger of all his NFT sales and earnings. 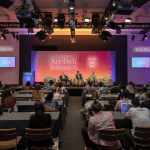 At Christie's Art + Tech Summit, Web3ers Sell Each Other on Mass Data and Mass Adoption

On July 18, Borisovs published a website, Art is Crime, where he recounted his version of the situation: In February, he discovered that his bank accounts had been frozen and his property seized, but was given no notice or reasoning for the seizure. In May, after much back and forth with the courts, the artist was finally told that he was being investigated for money laundering and had 45 days to prove the legal origin of the millions he had deposited in his bank account.

“[Initially,] I was surprised, Borisovs toldARTnews in a direct message on Twitter. “But then my surprise was replaced by bewilderment. It was bewilderment that lasted for days and weeks. I waited every day for a solution to this question. I thought that this was some mistake. I felt that they would talk to me, that they would cooperate, that we would solve it as in a civilized state of law. But that’s not how it turned out.”

According to Borisovs, a Latvian court ruled to unfreeze his account on June 30, at which point he attempted to pay over €3 million in income taxes, but found that the bank re-froze the assets before he could. Borisov said he is still locked in legal proceedings with the court over the funds.

Borisovs said that the freezing of his account has made it impossible for him to pay his bills or taxes and that, if he is convicted, he would face up to 12 years in prison. He said that he has shared with the courts all information concerning his NFT and Ether transactions, including tweets and correspondence.

“I carefully structured it all and made it as understandable as possible, even for those not connected to generative art and NFT,” said Borisovs. Still, he’s unsure what will happen. “The court may consider the reasoning that the police ‘have suspicions.’ And the police can drag it out until 2024 using bureaucratic moves.”

Borisovs’s story appears to be the first major example of a digital artist running afoul of authorities in regards to their NFT earnings, though given that 2021 marked an explosion in the NFT market, more could be on the way. In the U.S., numerous states recently announced new guidance or draft rules for the taxation and reporting of crypto and NFT sales and earnings.

“I know a vast number of artists, including much more successful ones than me, and no one has this problem,” Borisovs said. “The second half of 2022 came, and all the artists who made money in 2021 successfully paid their taxes and continued to work. They faced all kinds of problems: mistrust from conservative banks and the complexity of tax accounting and bookkeeping, but none faced criminal prosecution, much less police misconduct.”

The Latvian Police and the Latvian State Security Service did not respond to a request for comment.