Calvert 22, a London-based private art foundation run by a Russian economist, has been added to a list of international organizations sanctioned by the Russian government.

The foundation previously oversaw the namesake publication Calvert Journal. The organization, which seeks to promote artists who hail from the “New East (Eastern Europe, the Balkans, Russia and Central Asia),” closed its publication arm in February in response to the Russian federation’s invasion of Ukraine. 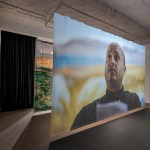 Prism of Relations: the 2022 Toronto Biennial

Russia also announced sanctions against nearly 40 British politicians, business leaders, and journalists this week, banning them from entering the country.

The move could restrict entry to Russia for the individuals involved with Calvert 22 who live abroad. According to the British publication ArtReview, Calvert 22 is one of 61 nonprofit organizations that have been listed as “undesirable” by the Russian government since the country’s invasion of Ukraine.

The foundation was established in 2009 by the Russian-born, London-based economist Nonna Materkova, who has pushed efforts to spotlight Russian artists and creatives. The foundation officially closed its exhibition space in East London in 2016. It was previously overseen by the curator and former ICA London director Ekow Eshun.

Materkova, who was formerly involved with the Hermitage Foundation, which comprises benefactors supporting its namesake state-run museum in St. Petersburg, condemned Russia’s invasion in February.

In a statement on social media published in February, Nadia Beard, a former editor of the Calvert Journal called the conflict and series of events that led to the publication’s closure “totally in keeping with the masochistic state of affairs in Russia today.”

The editorial team overseeing the now-defunct journal wrote that they “oppose the war in Ukraine and will continue to act in a way that ensures [their] staff and partners in the region remain safe during these difficult times.”