French curator and archaeologist Jean-François Charnier has been indicted amid an investigation into the the Louvre Abu Dhabi’s acquisitions of allegedly looted Egyptian antiquities.

Charnier is an adviser for the French Agency for AlUla Development, an agency that develops cultural projects in Saudi Arabia. He was brought into police custody earlier this week for questioning and was officially indicted on Thursday on charges of “laundering by facilitating the false justification of the origin of the property of the author of a crime or an offense,” the French outlet Le Monde first reported.

Charnier is currently under judicial supervision, according to the report. Noémi Daucé, a curator at the Louvre and cultural heritage expert, was also detained by authorities on Monday for questioning. She was released on Wednesday without being charged. 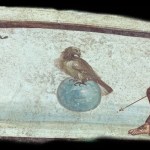 The two scholars were involved with the Louvre Abu Dhabi’s acquisitions of ancient artifacts while working at Agence France-Muséums (AFM), a private consultancy firm contracted to review the provenance records of artifacts being considered for the Emirati museum’s collection ahead of its opening in 2017.

Both experts worked with Jean-Luc Martinez, the Louvre’s former director, while he served as president of the agency’s scientific committee between 2013 to 2021, running concurrently with his tenure at the Paris museum. Martinez co-chaired the committee that approved acquisitions for the Louvre Abu Dhabi. He stepped down from his position at the museum in 2021.

In May, Martinezwas charged in relation to the investigation on the grounds of “complicity of gang fraud and laundering.” The charges against Martinez derive from his alleged failure to heed concern about provenance issues raised by another archaeologist. In June, the French government suspended Martinez from his role as a cultural ambassador following the announcement of the charges. (Martinez has denied any wrongdoing.)

According a report published by the Central Office for Combating Trafficking in Cultural Property, authorities found that while working on the acquisitions initiative under AFM, Charnier, Daucé, and Martinez ignored warnings of provenance gaps from outside experts, focusing instead on promoting good relations with the U.A.E., which forged a joint agreement in 2007 with the Paris institution in order to license the Louvre’s name until 2037.