Students at the Imperial College in London have decried an Antony Gormley sculpture that is set to be installed at the school’s revitalized South Kensington Campus, citing its allegedly “phallic” nature.

The sculpture, titled ALERT, is meant to represent an abstracted figure shown in a squatting position. But the students claim that it looks more like a man with an erect penis.

In a politely worded motion, the students wrote, “Regardless of artistic intent, Alert is interpreted by many as phallic.”

“There is nothing inherently wrong with phallic imagery in art,” they continued. “However, the phallic interpretation’s preoccupation with the penis could be considered inappropriate for a grand public display, especially given the statue’s size.” 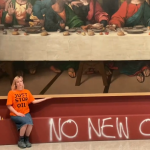 Why Climate Activists Are Gluing Themselves to Paintings Across the U.K.

ALERT, set to be installed this summer, is nearly 20 feet tall; the portion that juts out, which could represent either a set of bent legs or a penile shaft, is itself 10 feet long.

The statue is meant to adorn the newly built Dangoor Plaza, which is flanked by a library and a chemistry building. That the sculpture would become a focal point for a section of the school associated with the sciences rubbed the student union the wrong way, given the “issues with gender ratio and inclusion” in the sciences at the College and in the wider world.

The Art Newspaper commented that the Imperial College has a severe gender imbalance among its student body, with only 39 of those enrolled there being women, according to university-supplied data.

In a statement made prior to the students’ motion, Gormley said of the sculpture, “Through the conversion of anatomy into an architectural construction I want to re-assess the relation between body and space. Balancing on the balls of the feet while squatting on its haunches and surveying the world around it the attitude of this sculpture is alive, alert and awake.”

ARTnews has reached out to Gormley for comment in response to the student union’s motion.