U.S. Speaker of the House Nancy Pelosi concluded her controversial visit to Taiwan by going to the National Human Rights Museum in Taipei, where she met with prominent human rights advocates who were once persecuted by China. After weeks of intense buildup, Pelosi’s trip lasted less than one day, but it has already inflamed tensions between China and the island democracy, which Beijing claims as its own.

After meeting with Taiwanese lawmakers and Taiwan’s president, Tsai Ing-wen, to whom she offered assurances of United States support for Taiwan’s self-governance, Pelosi travelled to the museum. According to the Chinese-language news outlet Apple Daily,there she met withLam Wing-kee, a Hong Kong bookseller who fled to Taiwan after promoting material critical of the Chinese Communist Party; Lee Ming-cheh, a Taiwanese activist who was released this April after five years in prison in China; andWu’er Kaixi, a former student leader of the 1989Tiananmen Square protests. 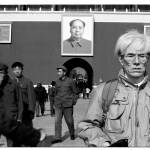 How Collectors in Indonesia, Malaysia, Thailand, and Taiwan Are Shaping Their Countries' Art Scenes

Pelosi was met outside the museum by pro-democracy demonstrators waving banners, as well as pro-China protesters, some of whom chanted “Yankee go home,” according to Bloomberg.

During Pelosi’s one-hour meeting with the group of activists, Lam expressed concerns for the fate of Hong Kong activists detained in the territory, as well as those who have fled to Taiwan but struggle to gain Taiwanese citizenship.

“I hope the United States can help these young people who resisted,” Lam is quoted in the online news outlet Focus Taiwan.

In recent years, Beijing has clamped down on freedom of speech and assembly in Hong Kong with the passing of ambiguous security legislation.

NHRM was founded in 2018 within historic army barracks that were used, until 1991, as a detention center for political dissidents including Annette Lu, a feminist activist who served as Taiwan’s Vice President from 2000 to 2008. Visitors can tour the complex, enter prison cells and soldier’s quarters, and listen to testimony from former political detainees. The museum’s purpose is “to avoid repeating the mistakes of the past and deepen the concepts of democracy and human rights in every individual mind,” according to its website.

In atweetafter the visit, Pelosi said “together with former political prisoners,” her delegation visited the museum as a “tribute to heroes who suffered & fought for Taiwan’s Democracy…We came to listen & learn; we left inspired by their courage.”

Pelosi’s trip marked one of the few visits by a member of a major world power to Taiwan. An island of 23 million people about 80 miles off the coast of China, Taiwan has become the greatest flashpoint in relations between China and the United States.

Taiwan began its process of democratization in 1987, spearheaded by a group of activists and intellectuals who opposed the Kuomintang. The island’s declaration of independence has been unequivocally rejected by successive Chinese governments, and the current president, Xi Jinping, has said the reunification of China and Taiwan is a goal of his regime. In the weeks leading up to Pelosi’s visit, Beijing increased its incursions into Taiwan’s airspace and declared Chinese jurisdiction over the Taiwan Strait.

In an opinion piece published in the Washington Postafter she landed, Pelosi said the world“must stand by Taiwan, which is an island of resilience.”