Last week, activists from the Italian climate action organization Ultima Generazione (Last Generation) attached themselves toBotticelli’sPrimavera(ca. 1480), held in the Gallerie degli Uffizi in Florence. Then, on July 30, the activists targeted another work: Unique Forms of Continuity in Space (1913) by Umberto Boccioni, which is held by the Museo del Novecento in Milan.

“We do not let ourselves be arrested lightly but we must immediately understand that there will be no art in a collapsing planet,” an activist referred to only by her first name, Simone, said in a statement from the group. “If we really want to preserve it, we must act now and abandon investments in fossils. There will be no art of any kind if we cannot afford to eat, if we die from heat waves. This is why we ask cultural institutions to take sides with us and to put pressure on the government.” 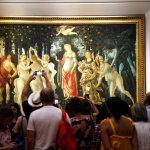 Why Climate Activists Are Gluing Themselves to Paintings Across the U.K.

The demands of Ultima Generazione are similar to those of Just Stop Oil, which has gained international attention for a string of high-profile actions that have involved activists gluing themselves to the frames of notable paintings.

Activists with both groups are calling for governments to stop issuing new permits for oil and gas extraction. Ultima Generazione specifically called on the government to increase solar and wind energy by 20 gigawatts by the end of the year, and to help fossil fuel workers find new employment in an expanding sustainable energy sector.

Ultima Generazione said that its members had been careful not to do any damage to the sculpture. They claim to have consulted restorers on an adhesive that would create no lasting damage, and that they made sure to attach themselves not to the sculpture itself but to the base of it.

Representatives of the Museo del Novecento did not immediately respond to a request for comment.