BETTER HOMES AND GARDENS.TheStorm King Art Centerin Upstate New York is embarking ona $45 million redesign and upgradeof its 500-acre campus that will include “visitor pavilions, a relocated parking lot, infrastructural improvements, and an art conservation and fabrication facility,” theArchitect’s Newspaperreports. A team has been tapped for the effort:Heneghan Peng Architects, which is based in Dublin;WXY Architecture + Urban Design, of New York;Reed Hilderbrand, of Cambridge, Massachusetts, and New Haven, Connecticut; andGustafson Porter + Bowman, of London.Promoting biodiversitywill also be part of the initiative, according to theArt Newspaper, with more than 600 trees due to be planted. The plan is for the work to be finished in 2024. 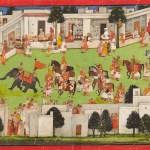 THE TOP JOBS.TheMetropolitan Museum of Art’s director since 2018,Max Hollein, will soon betaking onthe additional title of chief executive, theNew York Timesreports.Daniel Weiss, who currently holds that position, recently announced thathe will step down next June, at which point Hollein will occupy both roles. (His predecessor,Thomas P. Campbell, also held both jobs when he resigned in 2017.) Hollein told theTimesthat he views the appointment “as a step of continuation.” The Met is currently fundraising for new modern and contemporary art galleries, a project estimated to cost $500 million. Late last year, Hollein and Weiss announced thatOscar TangandAgnes Hsu-Tanghadpledged $125 millionfor it.

For alleged tax offenses, Italian officials have seized assets belonging toLanfranco Cirillo, the architect behind a palatial residence on the Black Sea that critics of Russian PresidentVladimir Putinhave linked to him. (Cirillo has denied wrongdoing, and Putin has denied owning the building.) The assets, said to total more than $143 million, include art and real estate.[Reuters]

Working under the nom de plumeBackground Bob, a British teen namedNoah raised £160,000 (about $194,400) for charity amid the pandemic by auctioning small pieces that he made for street artists to complete. Now artistEl Kouchhas paid tribute to Noah by painting a sprawling mural with his portrait.[BBC News]

Siobhan ReidprofiledHOA, São Paulo’s first Black-owned art gallery, which was started by artistIgi Lola Ayedunduring the pandemic, in 2020, when she had just $2,000 in her bank account.[Cultured]

Beyoncémentioning herTelfarbag—sometimes known as the “Bushwick Birkin”—on her new album,Renaissance, has reportedly led to a spike in demand for the fashion brand, which was founded in 2014 by Telfar Clemens. (In 2020, he appeared on theARTnews“Deciders” list, in an issue guest-edited by record producer and art collector Swizz Beatz.) [Page Six]

Here is a highly charming chart that composer (and painter!)Arnold Schoenbergmade to explain his unique notation system for recording tennis matches.[@NormalComposters/Twitter]

BIG MONEY—AND BIGGER MONEY.While the$195 million saleof anAndy Warholcan make huge art-market headlines, there is at least one field where such a figure is fairly standard, theNew Yorker’sEvan Osnospointed out in a recent story: yachting. “There are a lot of boats in build well over two hundred and fifty million dollars,” according to one yacht broker. These floating mansions now regularly go for more than even the most elite real estate. “People don’t want to live in a hundred-thousand-square-foot house,” a Silicon Valley CEO told Osnos. “Optically, it’s weird. But a half-billion-dollar boat, actually, is quite nice.”[The New Yorker]