Archaelogists discovered the remains of an ancient palace that may have belonged to Genghis Khan’s grandson Hulagu Khan in the Çaldıran district of eastern Turkey’s Van province. Excavations at the site are currently ongoing.

While the palace in question has not been definitively identified as a lost Khan residence, the excavation team, led by Ersel Çağlıtütuncigil of the Izmir Katip Çelebi University Turkish-Islamic Archeology Department, unearthed shards of tricolor-glazed ceramics and pottery, porcelain, bricks, and glazed roof tiles.

Munkhtulga Rinchinkhorol, a Mongolian Academy of Sciences archaeologist working on the dig, told Live Science the “‘s’-like symbols on the roof-ending tiles,” also known as the “svastika pattern or tamga,” are “one of the power symbols of the Mongol Khans.” Meanwhile, historical records from the 1260s detail the construction of Hulagu Khan’s summer palace in Çaldıran, but they don’t specify an exact location. It is thought the discovered palace could be this missing residence. 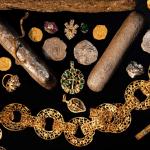 Based on the combination of found artifacts and historical records, researchers working under Turkey’s General Directorate of Cultural Heritage and Museums of the Ministry of Culture and Tourism believe that this could be the first known architectural remains dating to the Ilkhanate.

“No Ilkhanid work has been encountered until now. In this sense, this study was a first,” Çağlıtütuncigil told the Daily Sabah, a Turkish publication, in June.

Ultimately, additional excavation is needed to determine whether or not the structure can be tied to Khan. A report on the research is forthcoming.

Hulagu Khan was a Mongol ruler who lived from circa 1217 to 1265 CE. He is known for his successful military expeditions throughout the Middle East, including the sack of Baghdad in 1258 which destroyed much of the city.

Following the death of another grandson Möngke Khanhe, the Mongol Empire fractured in 1259. Hulagu Khan subsequently led a smaller Mongol Empire, the Ilkhanate State, where at the height of its reign included territory in present-day Afghanistan, Armenia, Azerbaijan, Dagestan, Georgia, Iran, Iraq, Pakistan, Syria, Tajikistan, Turkmenistan, and Turkey. The Ilkhanate collapsed shortly thereafter in the early 14th century, however, with the last remains destroyed in 1357.