For the first time since 2018, Ballroom Marfa, the 19-year-old kunsthalle in far west Texas, brought together supporters for a summer benefit on Saturday in Bridgehampton, New York.

Hosted on cofounder Virginia Lebermann’s estate, the fête began with guests taking a golf cart past a potato field and down a long, winding driveway to a charming shingled cottage that veiled the property’s enormous value.

In Lebermann’s twinkling garden, guests mingled as performers danced in black gauzy costumes. Some twirled on aerial silks, while another spun in a human-sized hamster ball grazing the pool’s edge. A woman fitted with a mermaid tail splashed beneath the surface. 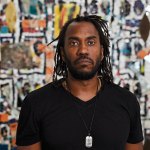 From Outside In: Rashid Johnson Has Plied His Status as an Art Star to Effect the Kinds of Change He Wants to See

During the cocktail hour, Ballroom’s other cofounder, Fairfax Dorn, took a moment to reflect on the benefit.

“It feels good to bring together everyone who knows and cares about Ballroom Marfa,” Dorn said, as her young son pulled at her hand. “It’s important that we get our supporters together and raise money, because we’ve been putting it off for so long.”

Occurring biennially and with its last edition in 2018, Ballroom’s summer benefit was delayed for four years due to the pandemic. With the institution’s 20th anniversary next year and lost time to make up for, the benefit was critical to long-impeded fundraising efforts.

At dinner, limited-edition artworks made in collaboration with Carolina Caycedo, David de Rozas, Kenneth Tam, and Sean Daly were made available for preorder. Proceeds of the sales went to Ballroom.

The benefit also provided the opportunity to introduce Ballroom’s supporters to its new executive director, Daisy Nam, who has been a curator there since 2020.

Last week, Ballroom announced Nam would take on the additional role of executive director, just in time to make her debut during this past Saturday’s affair. Nam has some big shoes to fill — several pairs, in fact.

Dorn transitioned out of that role in 2014 to be the institution’s artistic director, and Ballroom has cycled through executive directors in the years since. Susan Sutton, formerly an assistant curator at the Menil Collection, came on in 2014 and left in 2017; she was replaced by Laura Copelin, an associate curator at Ballroom under Sutton, who left in 2020, to be replaced by Laura Creed, formerly director of development at LAXART

Perhaps Nam will represent a longer-term fit, especially as she is tested against the demands of the 20th anniversary next year, which will be marked with a book to be published by Phaidon MonacelliPress.

“Preparing for this book has been an amazing process for me because I’ve got to do a deep dive on all the shows and artists from before my time at Ballroom Marfa,” Nam told ARTnews.

As for her vision for Ballroom’s future, Nam said, “The through-line is always going to be the same because Fairfax and Virginia have done such an amazing job in their mission to support artists.”

Dorn is a tough act to follow; she comes from a long line of arts supporters. Her grandmother, Nancy Negley, who died last month at 94, was a prodigious philanthropist who, like Dorn today, served on the board of the Whitney Museum. Negley was the eldest daughter of Alice Pratt Brown, who had served on the Committee for the Preservation of the White House in the ’60s (appointed by her friend Lady Bird Johnson), was president of the Brown Foundation, and also supported the Whitney; hence the museum’s Alice Pratt Brown directorship, occupied since 2003—the year Ballroom Marfa was founded!—by Adam Weinberg.

The night appeared to be a resounding success with many notables from the fashion and art world in attendance to celebrate Ballroom. David Lauren, of Ralph Lauren, Batsheva Hay, Cynthia Rowley, and Alexander Vreeland were in attendance, as were many artists, such as Rashid Johnson, Hank Willis Thomas, Robert Longo, Jules de Balincourt, and Robert Nava, whose paintings are currently up at the Watermill Center. Suzanne Deal Booth, Texan arts philanthropist and Top 200 collector was also in attendance.