Takahiko Iimura, an artist and filmmaker whose early experiments with video during the 1970s made him one of the first to use the medium to artistic ends, has died at 85. A representative for New York’s Microscope Gallery, which represents him, confirmed his death.

Iimura’s experimental films of the ’60s gained him a following in the New York underground, where his earliest admirers included filmmaker Jonas Mekas. These early works pondered the materiality of cinema as a medium, exploring concepts like the nature of time and projection. He later applied that approach to video when he began using a Portapak camera starting in 1970.

Born in 1937 in Tokyo, Iimura was one of the few filmmakers working outside the Japanese commercial system during the ’60s, and so his earliest works were shown in art galleries. Even when he came to the U.S. in 1966, his works continued to be shown in both theatrical settings and galleries, partly owing to the fact that some of his video and film works are installations. 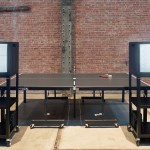 Be a Body: Shows Around New York Take Up the Materiality of Screen-Based Work

March of the Cyborgs: the 59th Venice Biennale

Among the early works to gain Iimura fame was 1962’s Ai (Love), a film of a couple having sex, the shots of their bodies deliberately abstracted so as to distort the act and skirt Japanese censorship laws. Artist Yoko Ono supplied the film’s soundtrack.

When Iimura showed the work at Yale University’s museum in 1966, the Yale Daily News reported that an “excited and unruly mob” of around 1,000 people had descended on the space, demanding to see what they called a “skin flick.” The police ultimately barred entry to the opening. That same year, a summer program at Harvard University had brought him to the U.S., and he moved to New York after it ended. Iimura lived in New York until 2018, when he moved back to Tokyo.

Iimura’s works from the era—and the remainder of his career—derived from an understanding of film that was guided by his upbringing in Japan. Noting that the word for “movie” in Japanese is 映画 (eiga, or “reflected picture”), he wrote that his filmmaking sought to initiate an experience quite unlike traditional cinema.

“‘Reflected picture’ emphasizes a state—not a motion—a state where a picture is reflected through light—not a picture which moves,” he once wrote. In that same essay, he recalled that the first movie he ever saw was a lantern at a village festival in Japan.

The artist’s initial experiments with video are by today’s standards lo-fi and simple-seeming, but for their era, they were in line with an impulse to harness the medium’s immediacy toward highly conceptual means. They involved the splitting of sound and image, using live feeds, time delays, and more to make his videos appear out of synch. In Self-Identity (1972–74), for example, Iimura recorded himself speaking phrases like “I am not Takahiko Iimura”; at some points, phrases like “I am Takahiko Iimura” are heard but not intoned, and Iimura remains silent.

TV for TV (1983), one of Iimura’s most famous works, features two TV sets that face one another. They broadcast two separate channels that are played live, although their images are mostly kept out of view of those looking at the sculpture, short-circuiting the blast of televisual information that was being felt by many at the time.

Iimura’s art had been shown widely at museums throughout his career, among them the Jeu de Paume in Paris, which mounted a retrospective of his work in 1999. The Whitney Museum mounted a two-person show of his art with Shigeko Kubota in 1979, and his work featured in the Museum of Modern Art’s landmark 1983 video art survey. TV for TVwas included in the 2018 survey “Before Projection: Video Sculpture 1974–1995,” which appeared at the MIT List Visual Arts Center in Cambridge, Massachusetts, and at SculptureCenter in New York.