Historically, when a young Manhattan gallery has experienced growing pains, it’s moved to Chelsea or, more recently, to Tribeca. Magenta Plains, a resident of Downtown New York since 2016, instead doubled down on Chinatown.

Two months ago, the gallery left its storefront space on Allen Street, steps from the Cantonese stalwart Congee Village, for a 4,500-square-foot, three-story building at 149 Canal Street. The diamond island this building occupies may well be the center of its universe: a few short blocks separate it from Tribeca, Two Bridges, and the Lower East Side. The mouth of the Manhattan Bridge opens ahead.

The building has quirky proportions—one wall is longer than the rest, so some corners form acute angles. The gallery’s lower-level, however, has an exhibition space unlike anything else in Manhattan, a roughly 16-foot-high white rectangle that can easily host monumental works most galleries of Magenta Plains’s stature can’t. The gallery’s cofounders, Olivia Smith, Chris Dorland and David Deutsch, initiated the renovation in late 2019, with an expectation that it would be completed inseven months. Nearly three years later,Magenta Plains will reopen on September 17 with a robust program—and tentative dreams for its future. 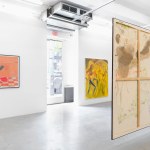 Nothing But the Truth: Israel Lund on Four Painters at Magenta Plains in New York

Around New York: On Some of the Season's Best Shows, From Hilma af Klint to Mary Beth Edelson

“I hope our artists enjoy the dynamic options of exhibition spaces here,” Smith said. “Maybe they have a more intimate body of work that would be complimented by a gallery with natural light, maybe they have a large-scale installation project—we have the flexibility now to accommodate that.”

Three concurrent shows by Ken Lum,Chason Matthams,and Liza Lacroix will inaugurate the new space on September 17. Lacroix, a new addition to the roster who makes rich abstractions, will present in the street-level gallery, while the second and basement floor galleries will feature Lum’s first New York show in 10 years. Solo shows are scheduled later for Alex Kwartler, Don Dudley, and Ebecho Muslimova, among others.

In late July, when ARTnews toured 149 Canal Street, the three exhibition spaces were empty. It was easy to appreciate the simple and functional aesthetic, wood floors, and gentle, energy-conscious lighting. The lower-level gallery is light-proof and nearly soundproof—perfect for black box film presentations. Its unusual dimensions are the result of a happy discovery made during the renovation, the trio said.

There was a drop of six or seven feet beneath the basement “floor,” virtually adding two extra stories to the property. They had to redraw the entire design, adding constructing delays to the laundry list of complications caused by the pandemic. But the dealers seemed up to the challenge. Dorland said the new space will do what every gallery should: “create a new frame for their artists to present their ideas and make sure the next show doesn’t look like the last.”

Most galleries are run by a single director, but the three founders work together to make all decisions. It’s an unusual setup for a gallery that had an unorthodox start, as none of the founders had any prior gallery experience despite all coming from backgrounds in the arts.

“When we started the gallery, we had talks about how to distinguish ourselves from the competition, and why we even wanted to open a gallery,” Deutsch said. “We just wanted to promote the artists we respect.”

They’re reluctant to name a common thread of the art that interests them. “I’m not sure I want to know why some art clicks,” Dorland said. But it is clear, however, that the dealers have a sharp eye for a multigenerational array of artists who have gone on to hit it big.

In 2016, Magenta Plainshelped reintroduce the work ofLillian Schwartz, a pioneer of computer art whose significance to art history inexplicably faded in recent decades. Later that year Schwartz’s creationslanded on the cover ofArtforum,andher work is currently on view in the 59th Venice Biennale.The gallery also exhibits Don Dudley, a New York transplant by way of California, whose modular paintings bridged the distinct coastal movements in abstraction. Dudley settled in Tribeca at the end of the 1960s, when a large community of artists gathered in theneighborhood’s surplus of vacant commercial spaces. In 2019, the gallery presented a solo exhibition of his early abstract paintings and delicate drawings (aptly titled “Don Dudley: Early Work”).

Most of the artists on the roster are pushing against some aesthetic or societal structure: Lum, capitalism; Dudley, binary approaches to abstraction; Muslimova, the patriarchy. It’s a spirit that has long coursed through the Downtown New York art scene, and one that Muslimova said Magenta Plains is honoring.

“I like that [Magenta Plains] isn’t trying to move in and replace history,” Muslimova told ARTnews. “There’s a feeling that they’re continuing something, that the gallery is an extension of an artistic community that’s been there for a long time.”

The area of Canal Street where Magenta Plains is now located has long seemed resistant to the wave of development sterilizing its surroundings. Stretching most of the width of Lower Manhattan, and connecting the Holland Tunnel to the Manhattan Bridge, the strip is constellation of street vendors, souvenirs shops, and outlets dedicated to single household items like plastic, rubber, lightbulbs, and wire. The city government has tried and failed to beautify Canal Street for decades, during which time strange and shameful histories have collected—an unhoused community of artists at the foot of the Manhattan Bridge disappeared overnight and a monstrous pile of oysters shells unearthed beneath its sidewalks, from when an actual waterway diverted sewage runoff. It’s a far cry from Tribeca, where many Lower East Side galleries have recently relocated for slicker digs.

Still, in recent years, landlords have bought out small businesses and increasingly policed the hawking of goods on streets. The pandemic stalled any major development. The Canal Street art ecosystem currently includes Bridget Donahue Gallery and veteran nonprofit Electronic Arts Intermix. Publisher Triple Canopy relocated there from Greenpoint, Brooklyn, in 2016 and during the pandemic, New York–based artists Ming Lin and Alexandra Tatarsky opened Canal Street Research Association (CSA), a multi-use space in a vacant storefront at the corner of Canal Street and Greene Street that’s served as a repository for community memory, exhibition space, and impromptu artist residency. (CSA has since relocated to a second-floor space at 264 Canal Street.)

It would be nice, Smith said, to build relationships with their new neighbors. She reached out to Bridget Donahue, but will have to wait until after the opening to properly explore the gallery’s role in the community. They’ve broached resurrecting some of the collaborative events of the neighborhood’s heyday, or developing new opportunities for artists to interact. The Canal Zone Party, after all, drew its name from the idea of unincorporated territories as places populated by creatives seeking connection.

“In the beginning we were excited to put on exhibitions, now we focus on strategizing on how to build careers, how to increase an artist’s visibility beyond our galleries,” Smith said. “I would hope that we’re working on behalf of our artists at all times. It’s become clear over the years that this is our community, this is who we want to support.”