2,500-Year-Old Healing and Fertility Offerings Have Been Found in Sacred Tuscan HotSpring

The archaeologists discovered offerings in the shape of newborn babies, wombs, penises, breasts, ears, and other body parts buried in the mud at the bottom of the pools. The offerings, which date to the pre-Italic Etruscans of the 4th century B.C.E., suggest that the thermal baths were considered holy for their healing powers.

These offerings, the experts assert, corresponded to the parts of the body the worshipper needed aid with, and the pools were particularly associated with aid in fertility and the health of infants, as is evidenced by the quantity of fertility symbols and the presence of a statue of the goddess of fertility, Isis, and the goddess of the first-born, Fortuna Primigenia. 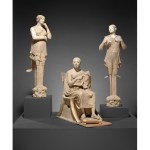 “The discoveries tell us a lot about Italy’s ancient communities and advance our research on their social, cultural and religious landscape with regard to the sacred nature of hot water,” archaeologist Jacopo Tabolli, scientific director of the excavation project and professor of Etruscan studies at Siena’s University for Foreigners, told CNN.

Tabolli also explained that the spring’s connotation with fertility lasted well into modern times. “Up until 50 years ago, village women who had trouble conceiving a child would come to the thermal baths in the belief that the water would relax their womb,” said Tabolli.

Discovered at the site was a womb-shaped offering made of bronze, a rare and valuable example of a statuette usually made from terracotta, which is telling as to the importance of these springs.

“What makes this site unique in the entire Mediterranean is the exceptional state of preservation, and the [evidence] it provides for how medical hot water practices were considered curative under divine protection,” said Tabolli. “The amount and quality of the objects recovered are also astonishing – we knew something was down there but weren’t expecting such a surprise.