London’s Horniman Museum and Gardens said last week that it would return to Nigeria ownership of 12 plaques from the Benin Bronzes, a cache of objects seized from the Kingdom of Benin in 1897 by British soldiers.

The museum said it was transferring ownership of these Benin Bronzes, plus 60 other objects that include an altar piece and brass bells, to Nigeria. However, it did not provide details about when—or whether—the objects themselves would be repatriated.

In many circles, the Benin Bronzes have been considered painful symbols of a colonial conquest. The objects made their way to England after being stolen amid a bloody expedition that saw the killing of around 200 Africans. Initially, some of the objects were placed on loan to the British Museum in London, where a number still reside today; many more were dispersed across Europe through a series of sales. 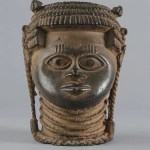 “The evidence is very clear that these objects were acquired through force, and external consultation supported our view that it is both moral and appropriate to return their ownership to Nigeria,” said Eve Salomon, chair of the Horniman Museum’s board of trustees, in a statement.

After Germany announced plans to repatriate all of its Benin Bronzes in 2020, museums across the world said they would undertake similar measures. The Metropolitan Museum of Art, the Smithsonian Institution, the French state, and the city of Glasgow are among those to say they will return Benin Bronzes in their holdings.

Often, museums wait until they have received a claim from officials in a certain country before undertaking the process of sending back objects. In the case of the Horniman Museum, the institution said it did not receive a claim from Nigerian officials until January of this year.

“‘We very much welcome this decision by the Trustees of the Horniman Museum and Gardens,” Abba Tijani, Director-General of Nigeria’s National Commission for Museums and Monuments, said in a statement. The National Commission was the organization that filed that claim.

While the Horniman Museum’s planned repatriation is a considerable win for Nigerian officials, the institution’s collection of Benin Bronzes is hardly the largest in the U.K. The British Museum is believed to still own around 900 objects from the Benin Bronzes.

Building on years of activism within the country, Nigeria is now actively working to bring back the Benin Bronzes. Many are expected to be housed in the Edo Museum of West African Art, a David Adjaye–designed museum that is expected to open in Benin City in 2025.