The ruins of an ancient Roman villa in England have been reburied on the recommendation of the government preservation organization Historic England just one year after they were found.

Located in what is now the town of Scarborough, the site included a large home, with a number of rooms coming off a circular central room, and a bathhouse roughly the size of two tennis courts. The ancient complex is believed to have been a dwelling for the elite or a religious site. The ruins were originally uncovered during an investigation of the land, which was slated for housing development.

“These archaeological remains are a fantastic find and are far more than we ever dreamed of discovering at this site,” said Keith Emerick, inspector of ancient monuments at Historic England, in astatementlast year. “They are already giving us a better knowledge and understanding of Roman Britain.” 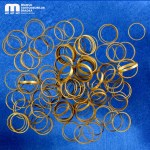 Now, however, it is being reburied in an effort to both preserve and maintain the ancient Roman structure. The ground above the villa will continue to be a public space where there will be an “interpretive depiction” of the ancient dwelling, according to a spokesperson with Keepmoat, the developer which initially sought to build homes there.

The practice of reburying is not uncommon. Archaeological sites can be reburied for a number of reasons, including financial difficulties related to maintaining a dig, as well as protection against vandalism, tourist damage, and weather conditions.

York, a city roughly 40 miles from where the villa was located, is the closest known provincial capital. It was settled by the Romans in 71 C.E. and served as a local seat of government for both Roman emperors Septimius Severus from 208 and 211 C.E. and Constantine the Great in 305 C.E. It wasn’t until the turn of the 5th century C.E. that the Romans abandoned Britain altogether.

Even though it is unclear exactly how the villa was used, experts agree that it was well-designed and constructed.

“This type of building layout has never been seen before in Britain and could even be the first of its kind to be discovered within the whole former Roman Empire,” Historic England said in its announcement.