INSIDE JOB?Officials in New York haveobtained an arrest warrantfor antiquities collectorGeorges Lotfion charges of possession of stolen property, theNew York Times reports. They have seized two dozen items from Lotfi’s holdings that they say were looted, most of them mosaics from Syria and his native Lebanon. The collector, who had tipped off investigators to illegal trafficking in the past, has denied wrongdoing. He remains at large, but did an interviewwith theTimes, and said, “I was fighting with them for 10 years to stop illicit trading, and they turned against me.” In the past, Lotfi apparently invited law-enforcement officials to see some of what he had in storage in Jersey City, New Jersey; authorities argue that his efforts to cultivate a working relationship with them were aimed at shielding his own activities from suspicion. 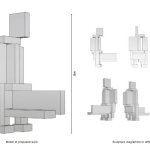 NOTCHING A WIN.Some students atImperial College Londonhave recently said that they are not fans of a sculpture thatAntony Gormleyhas proposed for the school’s grounds, arguing that it has a “phallic” quality to it (you can click and decide), but another U.K. school will soon be home to a new Gormley, theArt Newspaperreports. Cambridge’s city councilsigned offon a plan to install atKing’s Collegea 12-foot-tall piece by the British superstar—an abstracted body made of cubic forms—that aims to commemorate the renowned 20th-century mathematicianAlan Turing, who was persecuted for being gay. This piece had also generated some controversy, withHistoric Englandreps saying back in 2020 it “would harm the particular character” of the school.

A shooting at theIndian Museumin Kolkata on Sunday killed one police officer, and left another injured. A soldier alleged to have opened fire has been arrested.[ArtReview]

In his latest dispatch from Ukraine, criticJason Faragolooks at how museums worked to safeguard their collections as war approached. “We had to start from scratch,” photographerRoman Metelskiy, who was part of those efforts, said. “We were asking for packaging materials. For financial support.”[The New York Times]

Benjamin Keating’s latest show, atTripoli Gallery, in Wainscott, New York, features sculptures that incorporate bonsai trees. Doing business with “famous bonsai guys” was not easy. “It’s like they don’t want to talk to you,” he said. “They don’t want to deal with you.” [The New Yorker]

IN LIVING COLOR.The venturesome art dealerMagda Sawon, cofounder of the nomadicPostmastergallery in New York,sat in the hot seatforCurbedand answered its “21 Questions.” The color she is most drawn to? “Blue, from the super-extremeDiana Vreelandnavy blue toYves Kleinblue to a cloud where the whiteness is touched by a tiny, tiny amount of pigment,” Sawon said. “My favorite film isBlue, byDerek Jarman, which is nothing but blue for 60 minutes.”[Curbed]