In a Southampton manor so close to the ocean you can hear the waves breaking, budding gallerists William Corman and his partners Saheer Mathrani and Sahil Abbi have pulled off what might seem a bit of an oxymoron: a DIY show in the Hamptons.

For the last year, the trio, known as Gasp, have been putting on some of the most interesting DIY exhibitions in New York. Last fall, they put on a group show titled “Two Left Feet” in a WeWork on the Lower East Side that drew over 200 people and, earlier this spring, Gasp flew out seven Korean artists for “This Title Is Not Available in Your Region,” held in a penthouse space in a Tibetan cultural center. 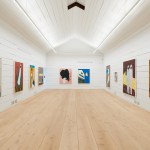 Gasp is simultaneously scrappy and privileged, like most budding curation and gallery projects. Corman and his partners quit their jobs – Corman was at David Zwirner, Mathrani at a brand management firm, and and Abbi at a trading firm – and put up an initial investment. They’ve been cut corners where they can, flying out artists instead of paying for shipping — as they did for “This Title,” after the war in Ukraine sent shipping costs skyrocketing — or taking on temporary jobs in exchange for discounted gallery space.

This August, the trio, who call Gasp a creative studio and incubator, opted for something even more ambitious. After the mother of one of Corman’s friends, a local arts patron, offered up the greenhouse on her Southhampton estate, Gasp has curated two solo exhibitions there: a series of works on paper by Filipino artist A.J. Pineda from August 2nd-7th and a collection of large functional pieces by Mike Ruiz Serra that ends on the 14th.

As it is a private residence, the show is by appointment only and the address is not publicly available. Gasp, however, opened the space to ARTnewsfor a peek:

As one drives up the long gravel path, startled baby bunnies scamper into nearby hedges and a Tudor-style house casts its shadow over a large stretch of lawn. A footpath leads to the greenhouse, behind which there is a garden. Spread-out seating areas are gently enclosed by manicured topiaries were young people flit around drinking white wine.

Wearing his trademark heavy black glasses and a slouchy pinstripe jacket, Corman hosted guests and introduced them to the space, the artists, his friends. The 24-year-old gallerist is that breed of young man who carry themselves with an easy aristocracy, charming and disarming and quietly, obviously, wealthy, capable of handling a budding business with grace despite his youth. For the artist, Corman worked that magic and landed him him in the middle of a bizarre but incredible opportunity.

“Obviously, this is surreal,” Pineda told ARTnews at a reception for the show last weekend. “Seeing my work in this context, in this full light, takes my breath away.”

Over the pandemic, Pineda became interested in how the same statues, for example, those of Rodin, would be photographed and mythologized in different catalogues. “Escape,” Pineda’s series on view at Gasp, was the result of a new method he was trying out where he would make statuettes out of resin that he would then draw with pastels as a way of commenting on the reframing work that goes into historicizing art. The works are moody and atmospheric, and set off perfectly against the single statuette on view.

Pineda got to know the Gasp team when he was included in “Two Left Feet,” fresh out of UCLA in 2021. “It was one of the first events where everyone was coming out of the quarantine and it was just insane,” he said.

At the “Two Left Feet” event, a bouncer fought back a long and pushy line, before an impromptu party started on the street from those who had given up on getting in. The inside was packed with minor celebrities like musician Blu DeTiger and downtown cool kids.

The Gasp team worked hard to promote “Two Left Feet,” collaborating with a director to create a trailer for the show, getting Shyan Zakeri of the clouty pop-up Shy’s Burgers to serve food, and involving local photographers in the show. “Everyone brings in their own crowd,” said Corman. “It was a way to get all these different groups under the same roof.”

For Corman, Gasp is an opportunity to bridge together once disparate parts of his life: the blue-blooded Upper West Side, private school crowd he grew up with, and the LES art scene that inspires him. When he first left for college, he thought he’d go on to be a doctor, and described his high school friends as not particularly cultured. It was his college peers that exposed him to fashion, films, and above all, art. And now he can bring it all together.

Pineda’s show has almost sold out and Serra’s series has sold well and the weekend crowd hasn’t even gotten to it yet. Most of the collectors are young, first-time buyers.

But despite the heady success Gasp has already garnered, the team is looking to expand into other sectors like hospitality and tech. And why not?