By Buying Frank Stella’s New NFTs, You Get the Rights to 3D Print HisArt

The Artist Rights Society, an organization that helps artists with copyright and licensing, is inaugurating a new Web3 platform. Titled Arsnl, it will launch on September 9 with a series of NFTs by Frank Stella.

Stella may be most widely known for his spare paintings of the 1950s and ’60s, which are considered forerunners to the Minimalist art movement. But the 86-year-old artist has previously used computers and 3D printing for large and complex sculptural works. According to Katarina Feder, Arnsl’s founder and ARS’s vice president, “NFTs were the natural next step” for Stella.

Stella is a longtime member of ARS, which Feder’s father, Theodore Feder, founded in 1987. Today, ARS represents the intellectual property rights of over 100,000 artists, aiding in copyright and licensing while also advocating for resale royalties for artists. 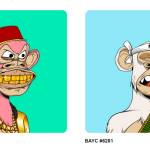 Billionaire Ken Griffin Outbid Crypto Collective for the U.S. Constitution to 'Protect' It

Stella has been dedicated to advocating for artists resale rights, campaigning for the the American Royalties Too (ART) Act for resale royalties along Theodore Feder and even lecturing law students on the subject. So the benefit of NFTs, which automatically send royalty payments to artists upon resale, was immediately apparent to him.

“NFTs are exciting,” Stella said in an email to ARTnews.“We can build in resale rights; that’s something we’ve worked, rather fruitlessly, on for decades. It will be wonderful if technology can give us what the government never would.”

When Feder sent out an email asking if ARS artists would like to participate in Arsnl, Stella’s team reached out right away. ARS and Stella began collaborating on a series titled “Geometries.” The 22 resulting NFTs are sleek, grey 3D objects which include some of recent Stella designs. The Geometries XXI (2022) NFT is clearly modeled after Stella’s Fat 12 Point Carbon Fiber Star (2016), a spheroid sculpture with 12 points. Each NFT in the series will be sold for $1,000 on the Arsnl site.

The NFTs are offered in editions of 100, and they come with an exciting perk: 3D printing instructions that only holders are have the right to use to make their own Stella sculpture. Stella said that 3D printing allows for infinite reproducibility.

“It’s an affordable and flexible way to own a Stella,” said Feder. “If you want to spend $100 printing a small one for your desk of $100,000 printing it large for your lawn, you can do that.”

Stella decided to work with Arsnl because he believes the platform, given its ties with ARS, will be uniquely placed to serve artists.

“ARS has always been a really strong advocate for its members, and Arsnl is the same,” said Stella. “As a reflection of that, they’re very good about making sure that it’s the artist, not the platform, who comes out on top.”

Compared to other NFT platforms, Arsnl’s feeis quite high. Upon the primary sale of an NFT sold on their platform, a one-time fee of 25 percent is applied. That’s a significantly higher fee than the ones on NFT marketplaces like OpenSea or SuperRare, where fees range from 2.5 percent to 15 percent.

Arsnl’s resale royalties are set at 10 percent, which is consistent with what most marketplaces offer. However, Arsnl’s fee covers “technical and legal expertise to help navigate the complex processes of NFT minting, promotion, and the licensing of artists’ intellectual property on the blockchain and digital spaces, as well as guidance to museums and corporations,” according to an Arsnl press release.

“This past year we’ve seen a few marketplaces begin to offer some aid in this department,” Feder said. “But for us, we have 35 years of licensing experience, real experience helping artists. I think that’s a unique position.”