The approximately 100 unionized employees at MASS MoCA in North Adams, Massachusetts, will go on strike on August 19, the union announced on Monday.

The MASS MoCA staff voted to join Local 2110 UAW, which also represents museum workers at the Museum of Modern Art, the Whitney, and the Guggenheim, last summer. Since then, the unionized employees have been trying to bargain for their first union contract.

The union is hoping to obtain a minimum hourly rate of $18 for the first year of the contract, with increases in 2023 and 2024 that get the minimum “closer to $20 per hour” by the end of the contract, according to the announcement of the one-day strike. MASS MoCA’s current offer is a $16 per hour minimum with no guaranteed increases, the union said. 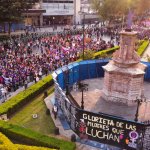 With two-thirds of the staff making $15.50 an hour, most of the Museum’s employees are living well below a living wage, according to MIT’s living wage calculator for Berkshire County, where MASS MoCA is located and where most of its employees live.

“Many of us live locally in North Adams. By raising hourly rates to something more livable, MASS MoCA would not only be supporting its employees, but helping lift the community,” said Isabel Twanmo, a box office representative who is on the union’s negotiating committee, said in a statement.

Maro Elliott, the manager of institutional giving and a member of the union’s negotiating committee, said in a statement that the hope with the new contract is to “create a more accessible, equitable, and just workplace.”

“While we respect our employees’ right to strike as a means of expressing their views, we are also disappointed in their decision, given the positive and collaborative environment that we have worked to foster during our collective bargaining process with the UAW,” a MASS MoCA representative wrote in an email to ARTnews.

The union is not just striking for better pay but in protest following what it has called a pattern of bad faith negotiating. The union has filed several unfair labor practice charges against MASS MoCA with the National Labor Relations Board, one of which was filed after the museum promised “additional raises” to certain employees if they convinced the union to lower its wage demands, according to the press release.

While MASS MoCA did not deny this in their emailed statement, the museum claimed to have been “negotiating in good faith with the UAW in order to reach a fair contract for both sides,” and that they have worked towards certain objectives “when their proposals have provided for a positive employee experience, and supported our museum culture of teamwork, collaboration, and excellence.”

“We’ve made significant progress towards reaching a contract and look forward to getting back to the bargaining table to continue our negotiations,” read the statement.

“Throughout months of bargaining, MASS MoCA’s representatives have been antagonistic toward our union, telling us the arts and artists come first. We all love MASS MoCA but we also have to live,” said union worker Maro Elliott in a statement.