In June, Documenta, one of the world’s largest art exhibitions, generated international controversy when it covered over, then removed altogether, a mural by the Indonesian collective Taring Padi that featured anti-Semitic imagery. But that work now appears not to have been the only Taring Padi piece to have been altered in response to the outcry.

On Monday, the Junges Forum DIG, a German Jewish youth group, said on social media that it had found more anti-Semitic imagery in another Taring Padi work. The group posted what appeared to be a before-and-after diptych of an image that it said featured a man wearing a kippah, or yarmulke. The man’s head covering has been obscured by a piece of black tape. 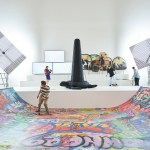 “You can see the caricature of a greedy, long-nosed Jew, which is known from Nazi publications,” the Junges Forum DIG wrote on Twitter, calling for Taring Padi’s removal from Documenta.

The print, titled All Mining Is Dangerous, dates to 2010. It is intended to depict an instance of environmental destruction in East Java in 2006 that resulted from the mining of natural gas by Lapindo, a large corporation. The explosion of a gas pipeline led to volcanic mud eruptions that caused around 10 to die and many to be stuck without power.

In an extended statement, Taring Padi said the work had been altered in June for fear that it could be misinterpreted.

“It is not, and was never, a depiction of a Jewish religious head covering,” Taring Padi wrote. Instead, it is meant to depict an Indonesian person donning traditional headwear known as a kopiah, which is wider and hangs down further than a kippah.

Taring Padi said it had made the decision to amend the work, adding, “In this case, this was not done to cover up, but as an aesthetic choice to respond to the immediate context in which the work was shown.”

Documenta, which takes place once every five years in Kassel, Germany, was this year curated by the Indonesian collective ruangrupa. Even before its opening in June, the show faced repeated claims that it is anti-Semitic from Jewish groups in Germany.

The removal of the massive Taring Padi mural, one of the biggest works in the show, was the most public-facing instance of this scandal. It resulted in the resignation of Documenta’s leader and threats from German politicians that the show could lose some state funding in future editions.

Other iterations of the controversy have focused on the inclusion of a Palestinian collective, the Question of Funding, which some pro-Israel Jewish groups in Germany claimed supports the pro-Palestine Boycott, Divestment, Sanctions movement. Ruangrupa and Documenta have denied that it was anti-Semitic to include the Question of Funding, whose exhibition venue was vandalized with what the show called a death threat.

In recent weeks, many have scrutinized the rest of Documenta’s offerings for any other potentially anti-Semitic imagery. A brochure depicting violence against Palestinians by Israeli soldiers is being exhibited by the Algerian collective Archives des Luttes des Femmes en Algérie; it was also decried by some German Jewish groups. Documenta said it wouldn’t remove the work, although it added an explanatory text.

Taring Padi’s work has also been given an additional text describing the context from which it is derived.

“In the general anti-communist climate of the Cold War, Suharto’s totalitarian state policy (also in schools and universities) was strongly supported by the USA, Israel, Germany, Great Britain and other states of the West,” that text reads. “During this period – especially in universities – students formed collectives as a counter-voice to the authoritarian state. Collectives such as Taring Padi, ruangrupa and others emerged in this socio-political context.”