Following her death in 2020 and a traveling retrospective, the influential painter Emma Amos has received a new level attention within the country’s biggest institutions. Further evidence of this trend arrived this week, when the Detroit Institute of Arts revealed that it had acquired an iconic work by her that had appeared in her retrospective.

Equals, a 1992 painting from a beloved series of works depicting falling figures, has now been added to the DIA’s collection via the museum’s Center for African American Art. It is the first painting by Amos to be added to the museum’s collection, and one of the few from this series to reside with an institution of DIA’s caliber. The work was among the highlights of her 2021 retrospective, organized by Shawnya L. Harris, that made stops in Athens, Georgia; Utica, New York; and Philadelphia. 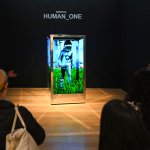 Amos’s paintings of falling figures were produced 1988 and 1992, and have been seen as a response to the sense of tumult faced by African Americans like herself. But Amos, whose work often involved clever perspectival shifts and dazzling uses of color, also phrased her explanation for the series in formal terms.

“I liked the idea of using the sky instead of having everybody just standing,” she once said. “It meant that you had to see the body in different kinds of ways—not a standing figure, not a lying-down figure, but a figure either in a kind of anxious position but also there could be some joy in flying through the air.”

In this work, a woman who may just be a stand-in for Amos herself is shown tumbling before a waving American flag. A photograph of a shack owned by Southern sharecroppers is situated in one corner; nearby is an equal sign that lures the eye toward the plummeting woman. The painting’s borders are identified by the DIA as being “African fabric” printed with images of Malcolm X.

Throughout her career, Amos confronted racism, sexism, and class oppression,both in her work and in her lived experiences.At times,she turned to activism, joining groups such as the feminist collective the Guerrilla Girls. She had long struggled to obtain gallery representation, and few works by her entered museum collections during her lifetime.

Still today, few of the top museums in the U.S. own Amos’s work. This is the case in New York, where Amos was long based—the Whitney Museum and the Brooklyn Museum have one painting each, while the Museum of Modern Art, the Guggenheim Museum, and the Metropolitan Museum of Art have none. Some of these museums do, however, own prints by Amos, which was also a significant part of her practice.

It’s also the case in Georgia, the state where Amos was born. The High Museum of Art in Atlanta has no works by Amos at all.

That all makes the DIA’s acquisition of Equals a rarity—and a coup.

Calling the work “extraordinary,” Valerie Mercer, a curator who serves as head of the DIA’s Center for American Art, said in a statement, “When I first saw this piece while visiting with Amos in her New York City studio in the early 1990s, it immediately drew my attention because of its bold colors and powerful brushstrokes, and its dynamic depiction of bodies in free fall as a microcosm of racial and gender disparities in society.”