The Web3 start-up Arkive has the epic goal of decentralizing a core component of the art world: the museum.

This is the basic idea behind many collecting DAOs, such as Fingerprints DAO or the Museum of Crypto Art, which pool together resources and decision making power throughout their membership. But Arkive does something different: members don’t put down any funds to participate (at least for now), the works it collects are meant to be loaned out to cultural institutions, and the objects that Arkive acquires are not only digital ones.

“The idea is that you’re part of a community that has that ability to decide what gets brought out and put into the world,” said Arkive founder Tom McLeod in an interview with ARTnews. 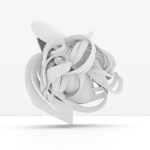 By Buying Frank Stella's New NFTs, You Get the Rights to 3D Print His Art

McLeod recalled a lunch with Huang in which she suggested that he had “the opportunity to to do something significantly impactful.” She asked McLeod to consider what a museum could be if it wasn’t constrained by its natural limitations: its physical location, its hierarchies, and all its intensive needs.

The idea grew into something very big: what if ordinary people, and not art-world gatekeepers, decided what was culturally significant?

Arkive may only have a few hundred members right now, but it does have a whole lot of money. The start-up recently emerged from a round of stealth funding in July with $9.7 million in its coffers.

So far, it’s made four acquisitions: a patent for the world’s first electronic computer; Lynn Hershman Leeson’s Seduction (1985), a photograph of a woman whose body fuses with a TV; the MTV Moonman prototype (1984) by Pat Gorman; and, most recently, Aria Dean’s Eulogy for a Black Mass(2017).

Eulogyis a nearly-six-minute-long video exploring memes featuring and spread by the Black community. “Memes have something Black about them,” she says at the beginning of the work. “The something is complicated and hard to make recognizable.”

The process by which the Dean video was bought mirrors the way that museums acquire artworks. Typically, curators at institutions are asked to persuade boards into putting up money for artworks. At Arkive, the curatorial team works to sell members on any potential purchases.

“Simon Wu and Kelly Huang presented Eulogy to the community, spent more than a month coming up with the docs [explaining] why they thought this is a thing that stood the test of time and belongs in a large-scale collection,” McLeod said. (Bard College’s Hessel Museum of Art also owns an edition of the video.)

On a private Discord channel, members spend time chatting about art, history, works Arkive should acquire, and ideas for what Arkive could be in the future. But it’s not just talk for talk’s sake. Voting power has to be earned.

The current goal is to collect works that speak to digital culture. “We loved how Eulogyshowcases memes as literature, as art, as cultural significance, tied to a very computer based distribution system,” McLeod said.

Dean is happy to see her work go to Arkive. Until last year, Dean was a curator and editor at the art-and-technology organization Rhizome, and was involved in preserving net-art era works. (She is also a practicing artist with work in the current Whitney Biennial.) In an interview, Dean said she is interested in efforts to organize the arts along different axes of power using technology.

“The only way anyone’s gonna figure out new ways of collecting, exhibiting, and circulating artworks is going to be through experimentation,” Dean said. “It’s an important gesture not only in terms of presenting a new model for shifting institutions, but also as a proof of concept for an actually functional and viable use of decentralized technologies that aren’t just novelty-oriented.”