Upheaval at the Orlando Museum of Art continued this week as Luder Whitlock, its interim director, resigned from his post after less than two months on the job.

Whitlock had been appointed to bring stability to the institution following a scandal surrounding a show of Basquiat forgeries.

“The Board of Trustees of the Orlando Museum of Art has accepted the resignation of Interim Director Luder Whitlock,” the museum said in a statement released on Wednesday. “As a well-known community member, Dr. Whitlock’s availability as a resource and guide to the Museum family has been very much appreciated.”The statement continued: “The Board would like to extend our gratitude and thanks to Dr. Whitlock for stepping up during our two times of need, and we wish him the best in his future endeavors.” 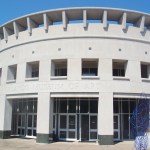 The museum said that the search for a “new, permanent” director and CEO is underway.

On August 18, the OMA announced to the public that Whitlock would lead the museum after the ousting of former director and CEO Aaron De Groft. The board of trustees voted to fire De Groft on June 28, four days after the FBI seized the contents of the contested Basquiat exhibition “Heroes and Monsters.” Whitlock was the former director of the Orlando-based CNL Charitable Foundation.

Throughout the FBI investigation, De Groft adamantly maintained that the works in the exhibition were Basquiat originals despite mounting challenges to their credibility. A New York Times article published in February identified a FedEx typeface on a piece of cardboard in the show that was not created until 1994, six years after Basquiat’s death. De Groft and the paintings’ owners said the works were created around 1982 by Basquiat while he was living and working in a Los Angeles studio space run by Larry Gagosian.

The FBI affidavit disproved their claims. Also revealed during the investigation was a threatening correspondence between De Groft and one of the experts he commissioned to authenticate the paintings. That expert later requested that her name not be associated with “Heroes and Monsters.”

According to the statement from August 18, the OMA has begun “reevaluating all exhibitions planned” by De Groft. A task force led by museum trustees Mark Elliott and Nancy Wolf “focused on reviewing Museum policies and procedures designed to help vet exhibitions” was also formed.

Whitlock’s appointment was designed to help the OMA “move beyond recent events and focus on the future,” the museum noted in its statement.

“We are taking some pretty definite steps,” Whitlock said at the time, adding, “We want to put the past behind us.”

The OMA also shared on Wednesday that several unnamed trustees had departed its board. According to the museum’s statement, a review of its new bylaws, adopted in April 2022, revealed that “at the conclusion of this past fiscal year, several members of our Board of Trustees had reached or exceeded their length of service limits.”