A political action committee (PAC) has donated $650,000 to the Smithsonian Institution, with most of that money going toward the creation of portraits of Donald and Melania Trump.

The paintings will ultimately go to the National Portrait Gallery in Washington, D.C., where all other recent Presidential portraits currently reside. This is the first time a former President’s portrait has been financed by a political organization.

Over the weekend, Trump’s Save America PAC disclosed a $650,000 “charitable donation” to the Smithsonian Institution with the Federal Election Commission. The funds will be used to “support the artists’ fees, shipping, framing, installation, and events,” Smithsonian spokesperson Linda St. Thomas told Business Insider. 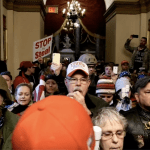 “Two artists have been commissioned, one for each portrait. The names will be released closer to the reveal of the paintings,” St. Thomas continued. “The creation of the portraits is underway. The timing of the artworks’ reveal not determined yet.”

The two portraits will cost a total of $750,000 in commission fees. The remaining funds needed for them will be covered by another private donation. It is unclear when the portraits will be done.

Most of the money raised by the Save America PAC comes from small-dollar donations made by individuals in response to email and other kinds of solicitations. While the donation is unprecedented, it is technically legal, as money raised by PACs can be used to fund candidates with mutual interests, advisers, travel expenses, and legal fees.

The National Portrait Gallery was created by Congress in 1962; it did not begin commissioning portraits, however, until Ronald Sherr painted George H. W. Bush in 1994. The First Lady’s portraits were later added to the commission by the museum in 2006.

Previous portraits have been funded by private donations. The $750,000 commission fees for the Obama portraits, painted by Kehinde Wiley and Amy Sherald, for example, were paid for by more than 300 donors according to the institution. Funding for the Obama or Bush portraits, however, were not supported by PACs.

Donald Trump made his debut in the National Portrait Gallery’s “America’s Presidents” exhibition last year with a photograph by Pari Dukovic of the former President seated behind the Resolute Desk in the Oval Office.