Archaeologists recovered parts of the frescoed walls and ceiling from the 2,000-year-old Cupra temple in Cupra Marittima, Italy, last week. Intact interior frescos of this kind are extremely rare.

The frescos are painted in blue, yellow, red, black, and green hues, and decorated with such motifs as flowery garlands, candelabra, and tiny palms. They were discovered during excavations that began in July under the direction of the University of Naples L’Orientale and the local town council.

Built at the start of the 1st century CE, the temple was dedicated to the Etruscan-turned-Roman goddess Cupra. It served as the spiritual hub of Cupra Marittima, a seaside settlement along the Adriatic coast that once helped the Romans secure the territory and maritime trading routes. During the Roman Empire, the town thrived as a strategically and commercially important outpost. 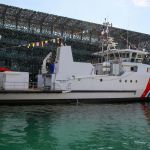 “It’s the first time that the ruins of a shrine painted with such a wide palette of colors in an incredibly well-preserved state—and with such rich, elaborate decorations—has been unearthed,” archaeologist Marco Giglio, the site’s research project coordinator and a professor at the University of Naples L’Orientale, told CNN. “Once we have cleaned and analyzed all the 100 fragments found and pieced them together, we hope it will give us a complete picture of what the temple once looked like.”

The frescos appear to be painted in the Third Pompeian style, which was typically used to decorate wealthy households found in larger cities such as Rome and Pompeii. Typical of the style, the Cupra temple is believed to have red, black, and yellow squares along the upper walls, separated by candelabra and garland motifs, with green bands running horizontally, as well as solid yellow painted along the wall’s lower section. In an unusual move, however, the ceiling is believed to have been completed in a sky-blue hue.

“The sky-blue color is very rare for ceilings, which leads us to believe it was meant to indicate the celestial vault and that the shrine was built to honor a goddess,” Giglio said.

Archaeologists believe it would have been an extravagant shrine, complete with a large goddess statue in the main sanctuary, but they have yet to determine the cult with which the shrine was connected.

Located more than three feet below ground level, the shrine was reduced to fragmentary rubble, with the exception of a podium and an entrance staircase.

In 127 CE, the shrine was completely renovated by Roman emperor Hadrian, who worried about the structure’s collapse amid damage caused by age and natural disasters. The walls were believed to have been chiseled away and the pieces reused for new floors. He had the walls lined with marble, and added 30-foot-tall columns with ornate capitals and lion-headed roof dripstones. Two brick arches still flanking the temple site were also constructed.

In the 7th century, the marbles and columns were knocked down and used as building materials. At the end of the 19th century, the temple walls were demolished, and a since-abandoned house was constructed.

The team is still trying to figure out how they will navigate these numerous layers, with only one-fifth of the site excavated so far.