A criminal investigation into an international trafficking ring that has seen the seizure of Egyptian artifacts from the Metropolitan Museum of Art and resulted in an indictment against the former director of the Louvre has expanded. The inquiry has now ensnared several public museums and universities in Germany who worked with new suspects in the case.

According tothe Art Newspaper, a Paris judge has issued European arrest warrants against four Hamburg-based dealers: Roben Dib, a German Lebanese gallery owner who is awaiting trial in a Paris court on charges of gang fraud and money laundering; Serop Simonian; and two of Simonian’s children. Simonian, a German dealer of Armenian descent, is thought to have played a key role in the selling of Middle Eastern and North African antiquities to the Metropolitan Museum of Art and Louvre Abu Dhabi. 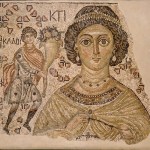 “The extradition procedure against the father is still pending,” a spokesperson for the Hamburg prosecutortold the Art Newspaper. “The arrest warrants against the children have been declined because they will be prosecuted in Germany. At first, they chose not to answer any questions and not to appear at police interviews, although one of them has since denied all the allegations through an attorney.”

In 2020, Hamburg police raided the apartment of Simonian and the Dionysos gallery of ancient coins and antiquities. Simonian and Dib, the manager of the gallery, have maintained the legitimacy of their operation. They claim that most of the antiquities in their stock was acquired from Egyptian dealers by Serop’s late brothers, Simon and Hagop, and exported from Egypt in the 1970s, when such operations were legal.

They deny that any antiquities to have been in their possession were looted during the 2011 Egyptian revolution, as alleged by authorities because they were registered in the collections of several German museums and collections.

They reportedly sheltered their stock for decades at four German institutions: the Roemer & Pelizaeus Museum in Hildesheim, the Reiss Engelhorn Museum in Mannheim, the University Institute in Trier, and the Egyptian Museum at the University of Bonn. In some cases, the institutions unwittingly acted as intermediaries for sales between the dealers and leading art museums worldwide.

According to statements provided by Serop, a Tutankhamun stele and funerary set that were sold to the Louvre Abu Dhabi had been stored at the museum in Bonn until 2010.