A Russian security guard at Yekaterinburg’s Yeltsin Center who doodled eyes on an abstract painting by avant-garde artist Anna Leporskaya last December was found guilty of vandalism by the local magistrate’s court on Monday. According to the Art Newspaper, he must serve 180 hours of “compulsory labor” and undergo “psychiatric evaluation.”

The painting, titled Three Figures(1932–34), was on loan to the Yeltsin Center from Moscow’s State Tretyakov Gallery and valued at 75 million rubles ($1.2 million).

News of the vandalism broke when visitors alerted gallery staff of two crude eyes drawn on the painting’s faceless figures in ballpoint pen. A police investigation revealed the culprit as 64-year-old Aleksandr Vasiliev, a securityguard employed by a private company. It was his first day on the job. 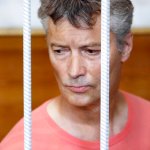 Russian Museum Director Detained for Speaking Out Against Ukraine Invasion

The Yeltsin Center filed a complaint with the police, but Yekaterinburg’s ministry of internal affairs at first declined to press charges against Vasiliev, as the damage was considered “insignificant.” The painting was restored and has since been returned to the State Tretyakov.

Vasiliev’s life story has also emerged: he is a decorated veteran of the Afghan and Chechen wars, in which he suffered physical and physiological injuries. He was also struggling mentally with the death of his wife and the murder of his son. In an interview with Russian news site E1, he said hebelieved the 20th-century work by Leporskayawas a “children’s drawing” and claimed he was goaded by teenagers to deface it.

The State Tretyakov has refused to petition for the charges against Vasiliev to be dropped. On August15, Vasiliev’s lawyer, Aleskei Bushmakov, shared a letter on his Facebook page that he sent to Zelfira Tregulova, the general director of the Tretyakov Gallery.

He wrote that “taking into account the circumstances of the criminal case, the damage inflicted to the paintingThree Figures”and “the high level of public attention in connection with the incident,” the museum considered closing the case “via reconciliation” but ultimately decided that it “does not regard it as possible to take such an appeal to the magistrate.”