Bones and All, the new Timothée Chalamet–led Luca Guadagnino cannibal film that is about to debut at the Venice Film Festival, has a new poster, and it came courtesy of the painter Elizabeth Peyton, who’s known widely for her portraits of celebrities and close friends.

The Bones and All poster that can now be seen hanging around Venice shows Chalamet and his co-star Taylor Russell locking lips. Their faces appear to dissolve into abstraction, thanks to Peyton’s thin brushwork.

The new poster is, in a way, a self-reference, since Peyton has previously painted young people kissing using similar compositions, and it’s an example of the way she returns over and over again to past images, retooling them slightly each time. 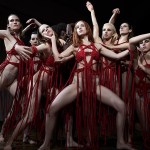 The Year in Screens, in Museums, Galleries, and So On

The painting in the poster is titled Kiss (Bones and All), according to Gladstone Gallery, Peyton’s representative.

It’s also not the first time that Peyton has created a painting portraying an image from a film by Guadagnino, who directed such works as Call Me By Your Name and the 2018 remake of Suspiria. In 2018 Peyton painted Elio, Oliver (Call me by Your Name), which shows characters played by Chalamet and Armie Hammer in a passionate embrace.

Peyton first gained art-world acclaim in the ’90s, with paintings such as those she made of Kurt Cobain, earning her notice by some of the world’s top critics. Rather than working from life, as most portraitists do, she painted her subjects from preexisting images. Then she surprised many critics by painting with her subjects physically in front of her once she became famous.

She has insisted that she makes “pictures of people,” not portraits, as she once told Calvin Tomkins in a 2008 New Yorker profile. “Whatever they are, the way she does them, with an unembarrassed emphasis on visual pleasure, suggests a shift in current attitudes about art and artmaking,” Tomkins wrote.

Like Suspiria, Bones and All is another arthouse horror movie from Guadagnino, whose films have gained a loyal following for their expressive portrayals of desire and longing. This one focuses on two cannibalistic lovers wandering across the U.S. during the ’80s. It’s set to have its world premiere this Friday at the Venice Film Festival.