A large mythical creature cast in bronze, among other relics, was found Wednesday at Sanxingdui, an archaelogical site in southwest China. The artifact, weighing 330 pounds with a length and height of 3 feet, is the largest and most complete animal-shaped bronze unearthed at the site.

The massive animal has a sacred tree engraved on its chest and a horn on its head with a bronze statue of a man standing on it. The figure’s thin frame is clothed in a long robe. Archaeologists believe the man might be trying to control the mythical creature.

Sanxingdui is a Bronze Age site in the Sichuan region of China. It was first uncovered in 1986, though locals had found evidence of ancient cultures there as early as 1927. The site has been linked with the ancient kingdom of Shu, which existed up until 316 B.C.E. The most important finds at the site center around a series of sacrificial pits filled with thousands of gold, bronze, jade, and other artifacts. 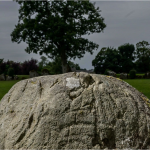 “Since the first excavation at Sanxingdui in 1986, the unearthed mythical beasts have been smaller in size, only about 20 to 30 centimeters long,” Zhao Hao, a team member from No. 8 pit’s excavation, told China Global Television Network.“The tree is engraved directly on it and can be seen as Sanxingdui people’s worship of the sacred tree, or has taken the sacred tree as a kind of divine presence.”

Of the roughly 14,000 artifacts uncovered at the 3,000-year-old sacrificial pits at Sanxingdui, this artifact is the first of its kind.

The work of archaeologists excavating sacrificial pit No. 8 is expected to be completed between late September and early October. The team plans to focus subsequent efforts on research and restoration.

Excavations at Sanxingdui have yielded a number of rare finds, including a bronze box and altar, andtwo millennia-old gold masks within the last year alone.