‘Startling Discoveries’: An Underpainting Was Found Beneath Vermeer ‘Milkmaid’ Painting

These “startling discoveries” were announced Thursday at a press conference at the Rijksmuseum in Amsterdam, which is planning a major Vermeer exhibition next year.

The recent scans showed an underpainting, an initial outline of the composition that provides a base on which the painting is layered. Originally, this underpainting included a jug holder and a fire basket that Vermeer subsequently painted over. 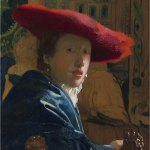 Four Vermeer Paintings Were Investigated During the Pandemic. Their Secrets Will Be Shared in a Major National Gallery of Art Show.

“So much work had already been done onThe Milkmaidthat we never anticipated something so definitive would surface thanks to modern technology,” the museum’s general director, Taco Dibbits, said in a statement.

The Dutch Baroque painter was known for depicting domestic interior scenes of middle-class life. The Milkmaid depicts a young woman at the center of the canvas pouring milk from a jug into a bowl. On the same table as the bowl sits various food items and a towel. Behind her, among the plain Dutch interior, are some baskets hanging from the wall and a foot stove.

Using the new scanning technology, researchers discovered behind the young woman’s head, a preliminary sketch in black paint that depicts a jug holder with several jugs. The jug holder, a plank of wood with nobs, would have been used in 17th-century kitchens for hanging ceramic jugs by their handle. Vermeer had a similar version in his home pantry.

A basket was also identified in the lower right-hand corner of the painting. Woven from willow stems, the fire basket would have contained a bowl of glowing coals placed inside the basket to keep a newborn baby warm and to dry diapers. The object was later covered in the painting, however, with a foot stove, Delftware tiles, and flooring. Vermeer, who had eleven children, also had a fire basket in his home.

Until now, experts assumed that Vermeer had produced his small body of works very slowly and with extreme precision. These scans of The Milkmaid show that the artist applied a thick sketch in black paint and added light and dark values, before further developing the detailed canvas.

In advance of the Rijksmuseum’s “Vermeer” exhibition, a team of conservators, restorers, and scientists collaborated with experts at the Mauritshuis in the Hague. Advanced Macro-XRF and RIS scanning technologies were used to examine a selection of Vermeer’s paintings, among them, The Milkmaid.

These technologies were also used as part of the museum’s research and restoration project, Operation Night Watch, which successfully recreated missing pieces and revealed a hidden sketch underneath Rembrandt’s 1642 painting The Night Watch.

“Vermeer” will showcase 35 paintings by the artist, with 27 of those works on loan from museums around the world, making it the largest Vermeer show to date. Highlights include The Girl with a Pearl Earring(1665) and Woman Holding a Balance (1662–63). The show opens to the public at the Rijksmuseum on February 10, 2023.