THE BIG REVEAL.TheWhite House hosted a ceremony on Wednesday for the unveiling of the official portraits of formerPresident Barack Obamaand formerFirst Lady Michelle Obama. For his, the former president tapped artistRobert McCurdy, who created a photorealistic painting. “Presidents so often get airbrushed, they even take on a mythical status,” the former president said, according to theWashington Post, as heexplained his choice,adding that “presidents and first ladies are human beings like everyone else.” The former first lady’s was done bySharon Sprung, who told theNew York TimesthatStudio Museum in HarlemdirectorThelma Goldenwasinvolved in the interview processfor the job. TheLos Angeles Timesreports that,in her own remarks,Michelle Obamasaid that “what we’re looking at today—a portrait of a biracial kid with an unusual name and the daughter of a water pump operator and a stay-at-home mom—what we are seeing is a reminder that there’s a place for everyone in this country.”

FIRST TO MARKET.On September 30,Sotheby’sisdebuting a new sales formatthat will see see artists and galleries consign works directly to auction,Melanie Gerlisreports in herFinancial Timescolumn. “With the right work, at the right time, artists and galleries can directly capture the upside at auction,Noah Horowitz, the house’s head of gallery and private dealer services, told theFT. Among the participants areKennedy Yanko(via dealerJeffrey Deitch) andVaughn Spann(via Almine Rech). Fifteen percent of the hammer price on each lot will go to a charity selected by the artist. 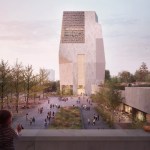 The pioneering ecological artistNewton Harrisondied on Sunday at the age of 89. Along with his wife,Mayer Harrison, he made works that involved collaborating with experts in a wide array of fields, like biologists and architects. “The intention is to the improve that which is around me,” he once said.[Artforum]

Emmynominees this year will receive a “swag bag” that includes a multi-day safari in East Africa and an NFT byRiver Kinney—“a nod to psychedelic art with a modern, surrealism pop culture twist in order to bring a metaphorical and overall ethereal experience to the human eye and mind,” per official literature.[PageSix]

Typhoon Hannamnor, which hit South Korea earlier this week, resulted in damage to 32 cultural sites in the country, includingBulguksa Templein the city of Gyeongju, where roof tiles were knocked to the ground and trees were uprooted.[The Korea Herald]

A COLLABORATION FOR THE AGES.The vaunted streetwear brandSupremeand the storied artistPope.Lhave joined forces,releasing a series of T-shirts and skateboard decks. The new products have images of Pope.L engaged in one of his legendary performances, sporting aSupermancostume and crawling through urban environments (with a skateboard strapped to his back, as it happens). Ina promo video, the artist was even kind enough to offer some advice to young artists who are just starting out. “Get a job you, you fuckers,” he said.[@SupremeNewYork/Instagram]