“We are thrilled to announce representation of Gideon Appah,” Marc Glimcher, President and CEO of Pace Gallery, wrote to ARTnews in an email. “This new relationship comes after more than a year of close conversation and time spent watching his incredible practice evolve.”

Appah, born in Accra, Ghana in 1987, takes inspiration from Ghanaian popular culture. He studied art at the Kwame Nkrumah University of Science and Technology (KNUST) in Kumasi and names Yinka Shonibare, Chris Ofili, El Anatsui, and Julie Mehretu as his major influences. 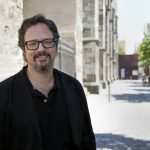 Pace Gallery Can't Stop Expanding in Seoul, Where It Has Upgraded in High Style

Appah’s recent exhibition at Mitchell-Innes & Nash in New York, “More Luck,” was a moment of deep confirmation for Glimcher, who was “blown away” by the new paintings. In this series, Appah usually striking tableaus were pared down, creating an effective, emotional simplicity.

Prior to “More Luck,” Appah had a major solo show this spring at the Institute for Contemporary Art in Richmond, Virginia, which showcased his talent at pulling the past into focus with a series that zoomed in on the hey-day of Ghanaian cinema. The industry grew dramatically in the ’50s and 60s, a period Appah represented by depicting the country’s iconic theater houses in his compositions. Those houses, which fell into disuse by the ’80s amid an industry slump, have come to represent Ghanaian film’s longgone peak.

Much of Appah’s work also takes a melancholy, surreal bent: figures lined up and staring over their shoulders, a woman with her head plunged into a bathtub full of water, lone horses against a gray sky.

“His compositions possess an ineffable, intimate spirituality that beckons viewers into their depths,” wrote Glimcher. “I am so excited that Pace is now part of the team of galleries behind Gideon.”