A rare silver quarter shekel, valued up to $1 million, was returned to Israel by the Manhattan District Attorney’s office in a ceremony on Monday, according to a press release. It is the fourth known coin of its kind to exist from an uprising known as the Great Jewish Revolt, which began in Ancient Rome in 66 C.E.

The silver quarter-shekel, which dates to 69 C.E., depicts palm branches and a wreath. It is among the rarest coins remaining from the Jewish uprising against imperial Rome, which saw the sacking and burning of the Temple Mount in 70 C.E. It was made by repurposing a Roman silver coin and restamping it with new motifs. 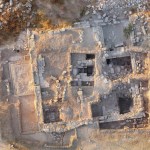 The coin was minted by Jews under Roman rule as a marker of sovereignty against their oppressors in 66–73 C.E. At that time, the Romans had forbid them from making silver shekels, which were used for higher commerce and religious purposes such as paying temple dues; they were, however, still allowed to use bronze coins for everyday purchases. Production of the coins stopped in 70 C.E. when the temple in Jerusalem was destroyed by the Romans.

The silver quarter shekel was only produced during two of the five years of the revolt, making it much rarer than the few thousand discovered shekels and half shekels. This coin is one of four known quarter-shekel coins minted in the fourth year of the revolt. One has been at the British Museum since the 1930s, while the other two are believed to be held in private collections.

The coin was looted in 2002 from an archaeological site in the Valley of Elah, where the battle between David and Goliath is said to have occurred according to the Bible. Investigators searched for the coin across multiple countries, beginning in the West Bank and traveling through Jordan and the United Kingdom. In 2017, the coin was seized from collectors at the Denver–based Heritage Auctions. U.S. Homeland Security agents seized the coin, with the cooperation of the auction house, but it took several additional years to establish a clear provenance.

“Today we join our partners to return an incredibly rare piece of Israel’s history, the Quarter Shekel Coin, a symbol of independence from the time of Roman presence in what is now modern Israel. This gem was looted and smuggled through several countries and sold with false provenance to unwitting buyers,” saidRicky J. Patel, Homeland Security Investigations New York Acting Special Agent in Charge, in a statement.

The unidentified sellers tried to block the confiscation on the grounds that the coin had left the country before Israel’s 1978 law declaring that all excavated relics from that point forward belonged to the state. According to federal officials, however, the consigners provided two false sets of provenance information.

Earlier this year, the Israeli government enlisted the help of the Manhattan district attorney’s office, which has a dedicated antiquities traffic unit, to prove that the coin was stolen. Since the coin had passed through Kennedy International Airport on its way to the Denver auction and had been stored by federal officials in New York, the office had legal jurisdiction.

Investigators determined that false provenance letters and photographs of the coin were used to solicit antiques dealers.

“We are honored to return the Quarter Shekel, an exceedingly rare coin that has immense cultural value. Despite the complexity of this investigation, our team of prosecutors, analysts and agents working with Israeli authorities, were able to track down this antiquity in just a matter of months,” saidManhattan District Attorney Alvin L. Bragg, Jr.“In just this year alone we have repatriated nearly 400 antiquities to countries all over the world, and look forward to many more of these ceremonies in the future.”