The Prado Museum, one of Spain’s top art institutions, said it would investigate its holdings to find works that may have been seized during the Spanish Civil War and deposited there.

On Tuesday, the Madrid museum released a list of 25 works that it identified as potentially having been placed with the institution under the regime of dictator Francisco Franco, which lasted until his death in 1975.

The list is available on the Prado’s website. Three works are missing from the site, the museum said, because the artworks were in too poor condition to be given proper entries. 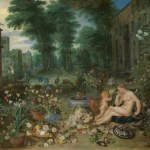 The museum warned that the list may not yet be complete and that the number of confiscated works in its collection “could increase.” To lead an initiative intended to find other works that may belong on that list, the museum appointed Arturo Colorado Castellary, an expert on the Spanish Civil War.

During the Spanish Civil War, which lasted from 1936 to 1939, various artworks were stolen, and in some cases, their original owners are still trying to re-obtain them. Earlier this year, for example, a Spanish family managed to track down and get back two paintings that had been taken from its ancestors 85 years earlier.

The 25 works that the Prado identified are not of the same quality level as some of the masterpieces in its collection, which includes pieces like Diego Velázquez’s Las Meninas (1658) and Hieronymus Bosch’s Garden of Earthly Delights (1503–15). Yet the Prado said the project was important because it could “clarify any doubts that may exist regarding the works’ history and context prior to their assignation to the Prado’s collections.”

It also said the project could “result in works being returned to their legitimate owners.”

Among the artworks listed by the Prado were paintings by Jan Brueghel the Younger, François Boucher, and Joaquín Sorolla.