Three paintings from the collection of Willemde Kooning’s heirs will debut at auction this fall. The works are expected to fetch a collective $50 million at Sotheby’s.

The three large-scale works, each of which the abstract expressionist painter produced between the 1960s and the 1980s, will be offered during a contemporary art evening sale this November at the auction house’s New York headquarters.

Montauk II (1969), a blue, green and white-hued painting, one of five knownpaintings from the eponymous series created the same yea,r will be offered during the sale. It carries an estimate of $10 million to $15 million. 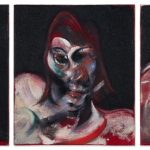 Works at MoMA from Former President William Paley's Collection Likely To Sell at Auction for Over $70 M.

In a statement, the artist’s grandchildren described being familiar with the work throughout their lives. “It was a window,” members of the the de Kooning family said. “We had the sea in the studio.”

Another untitled canvas produced in 1979 that features deKooning’s gestural style of painting is estimated at $30 million to $40 million. For the third work, The Hat Upstairs (1987), which features red and orange brush strokes against a white-ground, the New York sale will mark the first time it will be seen in a public venue. It is expected to fetch a price of $8 million to $12 million.

Lisa Dennison, Sotheby’s Americas chairman,described the three works as showcasing an “evolution” in de Kooning’s practice over the course of three decades. The artist completed each of the three paintings in his East Hampton studio at a home he designed and resided in from the 1960s up until hisdeath in 1997.