After receiving $3.2 million donation, Bard College in Annandale-on-Hudson, New York, will reinstall a wall work that Keith Haring made there more than 40 years ago.

That untitled work, a wall drawing from 1981 featuring five of the artist’s signature radiant baby figures in a row, will now be permanently on view at the school’s Center for Curatorial Studies, which is host to an esteemed graduate program and a museum.

In its announcement, Bard said the work’s reinstallation was meant to honor a grant of $800,000 made by the Keith Haring Foundation. George Soros and the Marieluise Hessel Foundation supplied matching funds. 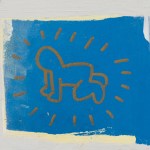 Tom Eccles, the Center for Curatorial Studies’s executive director, said in a phone conversation that the wall drawing had for years resided in the office of an art history professor named Tom Wolf. Haring had been invited to speak at Bard about the ethics of graffiti during the early ’80s and unexpectedly drew the image using Magic Marker.

With Wolf now set to retire, plans are underway to find a new home for the piece.

“Tom saved the work, having it cut out of the wall,” Eccles told ARTnews. “It’s been sitting in his office ever since. We’re going to restore the part of the wall in which it’s set and install it in the [CCS] library.”

The influx of money will also go toward the endowing CCS’s Keith Haring Fellowship in Art and Activism in perpetuity; it was originally conceived of as a five-year program. The Egyptian writer Haytham el-Wardany will be the next person to receive that honor.

Of the fellowship, Eccles said, “It gives an important contextualization for undergraduates and graduates, not only for what activism in art can be, but also how it functions in different types of contexts.”